Where is my lollipop? (object permanence and other tricks) 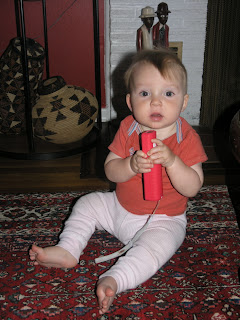 Wren seems to be developing very quickly at the moment. Yesterday, Michelle came by to help clean the house and Wren took one look at her and burst into tears, quivering lip and clinging hands and all. He looked as if he'd seen a raksasa.

He also plays games by himself. He pushes a ball across the carpet and then crawls after it. He "throws" it again and crawls after it. Just now Granny noticed that he has another game - this one with a small plastic strip that came off my water bottle. He drops it on the carpet and then goes and gets it. He drops it and then picks it up again. We think he may be interested in the fact that it doesn't roll away. He has done this at least 15 times while I am writing. Drop, retrieve, drop retrieve.

Today we went to the playground for a school summer-park date and helped tape lollipops onto cards to promote the school. Wren was playing with a lollipop and sucking on it through the paper. He was very intent on this task. When I took the lollipop away - suspecting he was getting blue food coloring and dye as well as a chew-toy - he was distraught and kept craning his neck this way and that way to see where the lollipop had gone. Later, when I had another lollipop in my mouth he was very demanding and tried to pull it out for himself. He clearly has object permanence along with his stranger anxiety.

Frost had a lovely day too. He ran around with the bigger boys playing tag and chase and squirt guns. "You can't believe how fast Frost runs nowdays compared with his friends who are bigger. He was playing chase and chasing" says Granny. He also had a playdate with Nate and lots of conversations about how to organize a treasure hunt for some gold pirate coins.

I will post some movies of Wren crawling later this evening.
Posted by Shannon at 12:49 PM No comments:

Also from the cardiology visit we had the good news that Wren will not have a fat leg forever!

For those of you late on this story, Wren's left leg is enlarged due to an obstructed ileac vein which was a complication of his initial surgery. This came to light after a vaccination in that leg which resulted in a very swollen and purple leg. It is still moderately enlarged.

Apparently, over time Wren's vein will form more collaterals to the point that the pressures are normal and the leg is a normal size.

We are very happy to hear this news as Josh was working on nicknames like Frankie Fatleg to last him through middle school.

The only downside from the appointment was that Wren has gained weight rather slowly in the past month. He had a pediatrician visit before we went away (after a couple of weeks of sleep training) and he was 90th percentile. A month later he is 75th percentile. I suspect this is due to the fact he no longer eats all night and is very distractible during the day.
Posted by Shannon at 1:46 AM 3 comments:

Today, Wren had his first cardiology clinic visit in 4 months. It was relatively brief. He was so wriggly and rolly-polly that it was hard to get a good echo tape but the tech (Brian) who has done all the previous studies managed to get enough to reassure Dr Lewin that all is stable.

The turbulence in the LVOT is still "moderate" although the velocity (4.3) was slightly less than last echo (4.5). Dr Lewin suspects that was due to the fact Wren was crying a lot last time rather than it actually improving, still, its good news that it hasn't changed.

His left ventricle is still thickened but no more than last time. That is because its has to push a bit harder through the narrow areas.

The aortic valve is doing well... no regurgitation and only a bit of turbulence (very mild) and the mitral valve is still appearing to behave normally. They got some good shots of the ventricle and valve and the LVOT ridge. It is not close to the valve which is apparently a good thing.

Wren complained a lot before Brian had any descending aorta shots but the arch seems okay too.

So, in general the LVOT is the only area looking moderately bad/good and which would cause Wren to go into OHS. Its our only real worry right now.

As a result of Wren looking "stable" we have the following dramatic news:
1) Next cardiology appointment IN FIVE MONTHS.
2) No echo at the next appointment - only EKG. If the EKG is reassuring...
3) NO ECHO UNTIL 18mths. That would be a sedated echo.
4) No more aspirin therapy.
5) Discontinue Zantac if we want to.

So, although Wren hasn't actually improved he is doing well. He looks robust, is developing normally and his heart seems stable. I thought he looked good but as soon as the echo wand approached and I saw that turbulence on the monitor I started to get anxious again. Nothing like the potential for bad information to freak you out.

Thanks for all the good wishes, prayers and thoughts.
Posted by Shannon at 7:37 AM 3 comments:

Today we have been unpacking the car and repacking the house with all our toys, wine, children and dirty clothes. I have at least 4 loads of laundry waiting but have done a quick milk and bread and vegie meatballs run to Trader Joes.

The good news is that everything made it home except my pillow. How my pillow was lost is a matter of conjecture. It recall putting it on the roof of the car as I repacked at a rest stop. I don't recall putting it back in. The novel I was reading has also mysteriously vanished. How we could drive off without noticing a bright yellow pillow with blue stars is... well... we were tired. It was a long day. We slept well last night in the usual 3 hour increments of Wren's way.

There was one other rest stop incident that deserves mention. Since I carry Wren about a lot I have taken to leaving my purse in the car and carrying my car keys tucked into my waistband. They have a long leather keyring strip which I tuck in and the keys hang out the back. This is only when I need a hands free moment mind you! At one rest-stop on the way to CA I took Frost to the public bathroom. The automatic flush toilet didn't detect him sitting on it (too short?) and kept flushing loudly which alarmed him so I leant over to hold my hand over the red eye. When he was done I lifted my hand and it flushed VOOOOOOOORM. I heard a clink and looked around on the floor for my keys. They were nowhere to be seen. I looked in the toilet and there they were in the bowl.

Now these rest stop toilets are not the usual delicate variety we have at home. They are stainless steel beasts with narrow gullets and try as I might i could not get my hand down the hole at the bottom to retrieve my keys. Added to the pressure was the fact that I was scared the automatic flusher would go and suck my carkeys down into the sewer so I had to stay at the toilet with my hand over the malevolent red eye. Frost was looking on in consternation. I showed him my keys. I said "I will give you five dollars if you stick your hand down there and get my keys".

I scoured him with that pink soap for ages afterwards and stopped Wren chewing on my keys. When we got to the motel I washed the keys repeatedly. Frost spent the $5 on chocolate which he has yet to finish. He had some on smores this evening.

10 days have passed and no-one has come down with cholera or giardia or some unknown reststoptoiletitis. Phew.

Today Wren explored the living room with his new crawling skills. He makes little hops, lunges and some steady crawling steps. He travels a remarkable distance and babyproofing is proceeding as fast as I can anticipate danger. He loves to find things on the coffee table and tug and chew wires so those are among the first thigns to be taped down.

Tomorrow is his first cardiology clinic in 4 months. I am hopeful but apprehensive. Wish us luck. I don't know how we will keep him still enough fora good image. All he wants to do is roll and sit and crawl.
Posted by Shannon at 1:38 PM 2 comments:

We have arrived home from our vacation (I was going to say "fieldtrip") to California. Wren was exhausted by car driving (about 10 hours on the road each day on the way home) and is very happy to being home. He has gone to bed without crying.

While away he:
1) Learned to crawl.
2) Decided to eat mainly at night so he could concentrate on new things during the day.
3) thus... became nocturnal.
4) Started saying RA RA and almost DA DA.
5) Tried to pick up fluff from the carpet.
6) Had to have rocks, pebbles, lego and bark removed from his mouth.
7) ate sand.

He has his next cardiology appointment on Monday 23rd. Echo and all.