Yesterday the mailbox contained a large cardboard envelope. It was copies of Wren's hospital and clinic records which I had requested from Children's. Apparently, it is a good idea to keep copies of these records.

This got me thinking, and thus googling Shone's syndrome/complex and anomaly. These terms are used interchangeably for Wren's condition. I found a new blog about a boy wo is ten with Shone's. He has had 2 OHS. I also found a record of a survey of the medical literature:

This sounded very encouraging. I stopped googling before I found something ominous. It made me realize that I am still very anxious about Wren's survival. I just wish our cardiologist would say something like that all the time. Long term outcome is EXCELLENT. EXCELLENT!!!!!! 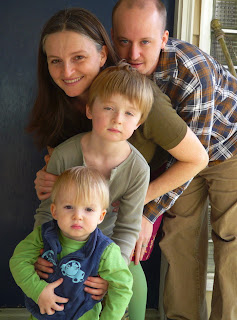 On dark afternoons when the house is full of rumpusing boys and the avocado has hit the carpet I feel I am single parent. However, this is not true. Most days Joshua is at work doing diligent and productive labor to support our way of life (and of food dispersal). He also helps a great deal at night since he is nocturnal and I turn into a ghoul after 10.30pm.

ASIDE: It is an interesting psychological fact that after 10.30pm and until 2.00am I lose any semblance of being a good parent. Even Frost has noticed it:

"Shannon, why do you kiss me goodnight and put me to bed and say nice things but when I come out of the bedroom you are very angry? You have a Dr Jekyll side."

Its true. I exhaust my last nugget of happy Mummy at books and bedtime and any child waking before I have recovered some Me-Time and Sleep gets The Shark Parent. SNAP!!! It is at these moments that Joshua is particularly useful.

Last night Frost woke with a night terror (a nightly occurance when he is slightly roused when I come to bed) and was babbling about Not doing it and You Love Him. Joshua calmly reassured Frost we love him too and took him to pee and tucked him in. It is Josh's theory that night terrors are caused by a full bladder. I don't know why terror and peeing are associated. Perhaps it is a boy-thing. I didn't say anything except "wake UP" and "Argh" and "God, he needs to start sleeping in his own bed." See, I am a total ....

Which brings me back to the family portrait taken by mum on the front steps. There we are - Josh looking slightly sinister, me posing as usual in a futile attempt to look fabulous, Frost caught between expressions and so somewhat blank and Wren rather puzzled because his photographic disposition is still to be determined. For now, he just wants the camera.
Posted by Shannon at 6:10 AM No comments:

We are very sad to have seen my mother back to the plane to Australia. According to my calculations she is about to touch down in Sydney on the long trip home. My only consolation is that we could talk about our plans for a visit at Christmas.

Meanwhile, we have the kitchen contractor and his crew in to demolish the kitchen wall and install patio doors between the kitchen and back yard. The wall has already been removed and the frame installed. It is ridiculous how light and airy the room is. Wren has been upset by sheets of plastic and reciprocating saws but managed to nap through much hammering. Frost has taken the day off to 'watch' and just finished watching a movie with Josh and is polishing off the jelly beans Granny gave him.
Posted by Shannon at 6:30 AM No comments:

This morning at 5.30am I was reviewing the night weaning literature.

Option A: cold turkey aka frantic baby. You just stop nursing at night and hope he gives up within three days as is "usual". No specific references to 14 month olds who like to nurse twice a night and get up at 5.15am.

Option B: gradual withdrawal. The troops remain in the bed each night but the volume is slowly reduced. You try and respond BEFORE he usually wakes but at around that time. Theory is that he will not associate crying with the milk arriving. Some crying and complaining may result but at least you know you are not leaving him hungry. You can't give in because you think he's thirsty.

Option C: Strategic delays. Each night you respond to crying AFTER a set time. The time drifts later each night or so. Eventually you are only nursing at a wake-up time. This is not such a shock to the system but involves crying at the usual waking time.

I am leaning towards option C. I am thinking of starting with 3am as the deadline.

Last night was ludicrously sleepless. Frost woke at 12.30pm and needed help. Then again at 1.50 with painful legs (growing pains?). I gave him tylenol. Wren woke an hour later and nursed. Then again at 4.30am. I nursed him in exhaustion and he slept for all of 15 minutes before crying. After ignoring him a bit he quieted then cried. When I went in he was still clearly tired by crying. Ugh. I got him up but he has been cranky ever since. I am not cranky because it was just such a bad night that you have to shrug about it. I shall be hitting Zoka for a double later on.

Today is my first Monday workshift at school so Heather, the nanny, will reap the benefits of his early rising and get a long nap this morning. I may ask her to wake him so I can steal a bit of it later. We shall see.

Mum is still visiting and is reading to Wren and entertaining him which is why I am able to type right now. I have also had a shower and washed my hair, normally on the Do No Do list according to Mister W. Mum is also coming to school to do a short talk on her trip to the Desert in Namibia. 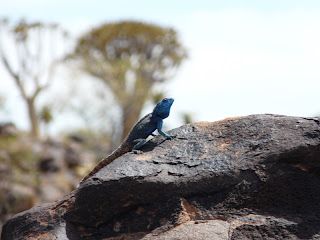 The sun should be rising soon and perhaps it will be another sunny day. The summer garden plan is in its draft stage and Joshua and I have begun the annual debate about whether to grow peppers. He tells me that broccoli is on the list. Both our kids love to eat broccoli.

I don't often post pictures of Josh but I am not a single parent. Here are Josh and Wren in the basement with Frosts replacement kite in the background. Kite #1 was lost out to sea on a KapKa camping trip one summer. We shall not revisit the pathos here. 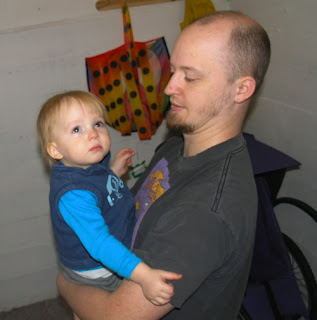