Kangaroos in the mist 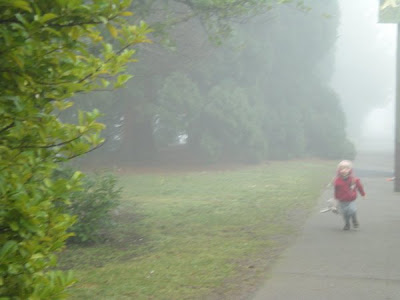 Seattle was covered by a thick fog this morning. After dropping Frost at school Wren and I went for a walk to a coffee shop until zoo opening time. I am trying to train local barristas to sell me a kiddicino as they do in Australia (foamed milk in a tiny cup with a bit of chocolate on top but no coffee). They consider it a novelty and give them to me free. Wren enjoyed his while I had a real coffee. Here is Wren bringing snuggle-bunny through the mist to the coffee shop, Fresh Flours. 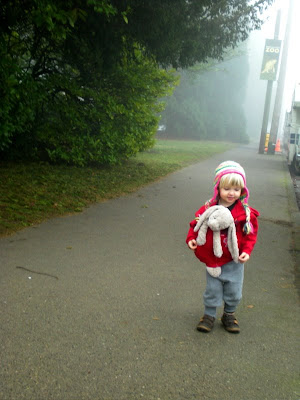 The mist was still heavy when we reached the zoo. Wren told me he wanted to see the grizzly bears (aka "panda bears" in his words) and the 'nakes. The Nakes only open at 10am so we passed by the Australian exhibit while heading to see the bears. The bears were pretty dull - practicing a bit of hibernation by the pond - but the kangaroos were out and about. The misty field reminded me of camping at Lammington National Park (O'Reillys) at Green Mountain outside Brisbane. I would love to take the kids there sometime. The parrots come down on your hands and in the misty mornings the wallaby graze right by the tents. Bower birds display their blue treasures in the undergrowth nearby and there are wonderful trails AND a coffee shop. Argh! I really need to get out of town even if I don't make it to Australia next weekend :) 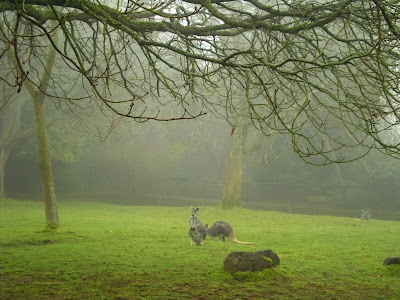 The otters were also very active. Wren was concerned because the otters had a Christmas tree in their pool and were using it as a toy, swimming under and around. Wren hoped that the otters would go into their den which has a glass front. He likes to see them go "night night". Today the otters looked as if they had just woken up. Here is an otter diving past the Christmas Tree. 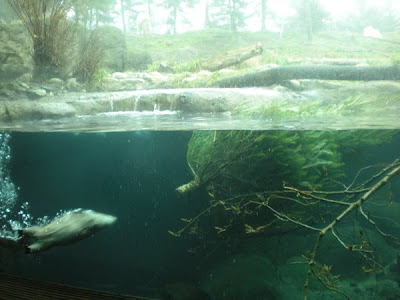 The only part of our Zoo visit which Wren did not enjoy was when the lion started roaring just out of sight. I think we were at the back of his pen but the roar was alarming loud for Wren who refused to get out of the stroller and kept asking to "go home" for a while. As the roars receded with distance he check with me "lion not get You?" "Lion gone far 'way?" I reassured him the lion could not get out and get him. It is funny how he calls himself You. I hadn't really noticed until today.

Josh looked after Wren tonight while I was doing a school cleaning for our Open House tomorrow. Unfortunately there was another 'poop in the bath' incident which was distressing for Josh and Wren. The good news is that Josh was not IN the bath at the time although I remain suspicious of the few toys that partook of the poopy puddle.
Posted by Shannon at 2:57 PM No comments:

Its a funny time of year around here. Its cold (but not SO cold) and dark (but not SO dark). You have the feeling you 'should' be doing more but its about all you can do to keep the house upright and the kids fed. I have found myself turning off the news some days. Wondering and worrying about things from the plants that died in the winter-superfreeze, to what I should do to reduce CO2 emissions, to how real are Wren's chances of growing up to a healthy adult with the world intact around him. It is a time of visible change in many areas of all our lives right now (we all know that life is always in change, right? Right? [hit self on head for emphasis] but at this point it feels as if its hard to see where things are going. Its not so much the 'butterfly effect' but a swarm of stampeding buffalo spinning things around upstream and down.

The Economic Crisis has affected us to the point that I am trying to avoid vicarious spending (even at Value Village) and am postponing my big dental work for a month to eek it out into a happier budget. I have delayed my bi-weekly visits to The Therapist which I much enjoyed (sanity is less valuable than groceries) and we are not going to replace the vacuum cleaner nicknamed Airforce One for its awesome power AND volume.

Re: Vaccuum - It works fine but has visitors covering their ears, cats running and kids screaming "wait, wait... I am going to another room" while it devours all in its path (including carpets and blinds) spitting power-drive cables in its wake. It will be a mark of an economic thaw when I finally cough up enough to buy a new one but for now Wren and I can manage to keep the house clean together with our matching His and Hers Hoover's.

The Den in the Basement
The kids have been enjoying the space in the basement after our midwinter cleaning and playdates are now a lot easier. They hang out down there and drink canned juice, throw darts, make Rokenbok trucks crash into each other and play various invented games involving projectiles and scoring with runes. Its like SPY meets ARMIES (even if spies=code and armies=playmobil dudes).

The only one upset by the new arrangement is Wren who routinely asks to "go down self?" to join in after school playdates. If he is allowed downstairs things deteriorate fast with games like "run away from Wren" or "make Wren throw darts at us" which undermine my faith in Frost's inate good sense. Nope. Not here. I suspect that when future generations do the mapping of the family DNA we will find a black sheep who lived naked, used projectile weapons and ran in a pack. Wait... that sounds familiar? Hoo hoo hoo!!

Wren update
I am often asked "how is Wren doing?" I wish I could do more with it. The answer remains twofold 1) How is his heart and 2) how is he day-to-day.

Wren's Heart Update
We don't know how Wren's heart is doing. We have a cardiology clinic visit on March 2nd and until then we don't know. We do know that while his surgery went well in terms of recovery it did not produce as great an improvement across the valve as we had hoped. Further, about 30% of sub-aortic resections require re-operation due to recurrent obstruction. Wren is at high risk for this blockage returning. We hope to give a good report in early March.

If things are stable we will (insha'Allah) make a trip to Australia that month. However right now I have a constant anxiety about Wren's heart. At times I want to cry, just wishing I could be the one with a wonky heart instead of him. I have always had a great endurance and it feels so ironic that I have prided myself of my own stamina when that is now so meaningless.

As he develops and shows his personality and intelligence I also fear future surgeries and the loss of any part of him to complications. I don't want him to be 'broken' at all and while his scar is healing beautifully it is still a reminder to me. "Owie all gone" says Wren but I know its not gone. Its just lurking.

Shone's Syndrome Musing
Its also difficult to handle the label "progressive" which is commonly used about Shones Syndrome. It means that the heart defects shown in kids with the syndrome are not static. You can't think of heart surgery like repairing a broken leg or cleft palate - the anatomy is not a bone which is stable when it is repaired. The heart continues to grow and the muscle responds to repairs and grows differently when the blood flows through the changed anatomy.

Sometimes repairs hold ("he is stable") but sometimes the body's growth and healing undo the benefit of the surgical change. This can up and change over time. We know Wren needs an aortic valve replacement at some time in the near or far future but we want to hold out as long as possible in hopes of making this his last AV surgery and of postponing blood thinners until he is less prone to daily bonks. We also know his mitral valve is abnormal and has regurg. What will this mean?

Only the future will tell and in the meantime it is a waiting game which is not fun to play.

Day to day wonderful
On the other hand - cheerful point 2) Wren looks and acts like every other toddler day to day. He is doing GREAT! We have not been hit by colds and coughs and flu (although Josh has a viral illness right now and is feeling lousy). Wren has plenty of energy and meets or exceeds all his developmental milestones. I was on the phone yesterday and the caller overheard me acknowledging Wren telling me "I squash a tiny tiny bug dead." It turns out he had squashed a dried husk of a winged-thing he found on the window-sill. He comment was "it is such a precious age." Well, sure. I smile often and I want to eat him up he is so cute but he would say "Shannon, do not eat me". (yes, the blight of "shannon vs mommy" has begun.)


I was going to do a Frost update too but this is way too long for writing or reading. I shall do a Frost post in a day or two.

Signing off with some neurosis about the future of earth, heart kids and the economy [I am having 'head to the woods with a solar panel' fantasies but there are no cardiologists out there. Crap.]