I have been looking for a 'class' for Wren to attend. I would like something that is short and only once a week. Music, art or big jumping activities would be ideal. Yesterday I took Wren to try out a class at the Little Gym near our house. It was not a typical class because it was the end of a session and the children were "showing off" their skills. Wren liked the room, he jumped and balanced his way around it but I have decided not to join the class. The problem is that it is a lot like pre-gymnastics - not just gym in general. They do balance beam and forward rolls and hanging bars and swinging on parallel bars and even rolling around a bar. Since Wren is only just released from 'sternal precautions' I feel that all this gym might be a bit much.

Still, its hard. I wonder whether this is the beginning of a sloap (aka a soapy slope) on which I restrict Wren's activity due to his heart condition or surgery. I hope not. I would like to hear from other parents whose kids have had OHS but don't have explicit restrictions on activity. Do you find yourselves stopping them playing some games or sports or just let them try? I am not cautious at home. Just seeing that room of balancing, swinging, rolling, jumping and bouncing toddlers I felt protective of Wren. Plus there were 3 kids coughing disturbingly!

We are going to try out the Nurturing Pathways toddler class to see if that is a better fit.

First Haircut
Wren and Frost both received a haircut this week. Wren did not enjoy his haircut despite being able to sit on a wooden whale, watch TV and have his brother and mother sing to him. The salon gave him a certificate which said he has "bravely received his first haircut" but it was a generous assessment. Here is Wren having the snip . 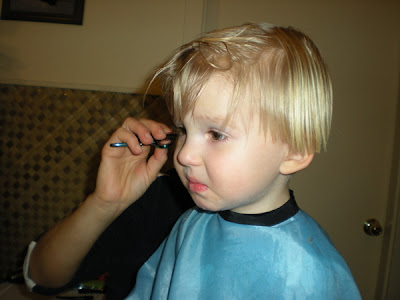 The hairdresser did not do much beside make a straight bowl cut and even then Wren barely made it. I doubt you would notice that he had a haircut.

Biking to Greenlake
On the weekend Frost suggested we go for a bike ride. Lauren lent us a bike so both Josh and I could go and we put Wren on the back. It was cold but lovely and bright and we made it to Greenlake (via Cohen Park) for a cup of hot chocolate and a cookie. 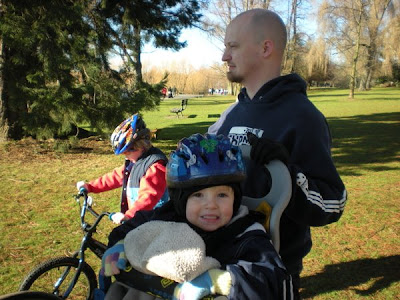 Here is Wren hiding in the shrubbery next to the coffee shop. He gave me a real fright by vanishing into the hedge. I thought he might have run through into the neighboring yard! He is very unusual when he plays hide and seek because he can wait very still and silent for a long time waiting to be found. 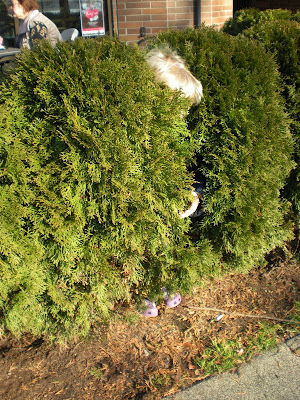 Frost was so taken by the sunshine that he asked whether he could get all wet in Greenlake. I said "no". He nagged and I conceded that he could wade and experience the "natural consequences". Of course he wanted to know what that meant and when I explained it meant that he would learn why I thought that wading in icy water was a bad idea by experiencing the consequences - he was determined to prove me wrong.

Here is Frost in Greenlake telling me that there are no natural consequences and he is having fun. Josh is benignly unconvinced. 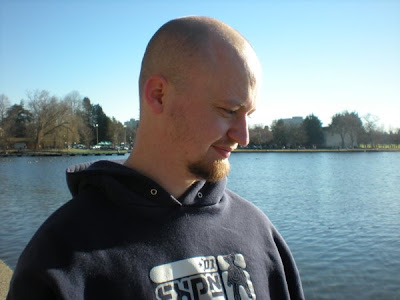 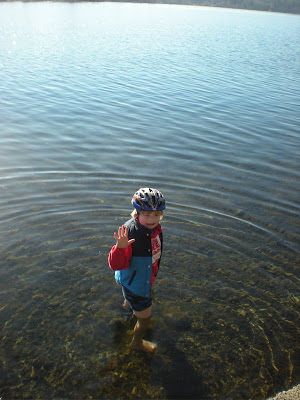 We had lovely clear weather this past weekend and managed to get out with the kids to make some vitamin D. On Sunday morning Wren and I went birdwatching at Union Bay Marsh. The area and shores of Lake Washington are home to many overwintering birds.

It was very cold and the rivulets of water crossing the path were frozen over. Wren enjoyed stamping on the ice and trying to crack it. Little ponds were also frozen and pebbles skittled across the surface in a musical way but if a large rock was thrown it cracked the ice and felt through, trapping big white air pockets under the dark surface. 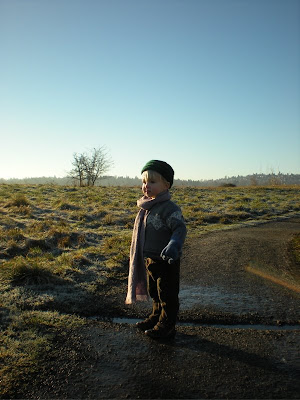 In this picture Wren is listening to the call of the Red Winged Blackbirds. There were many of them on the bare shrubs and trees, calling to each other in sequence. Wren learned to identify the song and I ahve a little movie clip I should put up showing him listening and identifying the bird. He particularly enjoyed looking at the picture in the bird book and saying "that is him!" (to everything from Sandpiper to eagle. 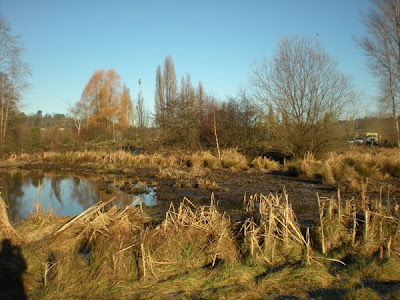 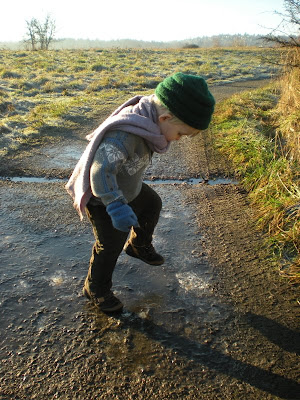 While walking around the trail we ran into Marth (Lincoln's Gran) and may be able to do the Little Gym class at the same time as they. I hope it works out. Martha walked around with us and has also been thinking of bringing Lincoln to the park and has bought the same little bird book of Seattle Birds to learn the local critters. The Union Bay area is very popular with birdwatchers - we saw about 10 other people with binoculars and/or very large lenses on their SLR cameras. My little Nikon was an anomaly (but my subject was closer - in the scenic shot there is actually a red-winged blackbird in the far tree but it appears only as a dot).

When we came to the banks of Lake Washington we noticed some bird photographers pointing out a pair of bald eagles who were attacking a coot out on the lake. We hurried over and watched the pair of eagles dive-bomb the little coot who ducked and dove bravely while swimming for shore. There was a flock of several hundred coot in a protected inlet but this little coot had wandered from the protection of the flock.

After about 8 passes at the coot (at times the photographer thought the coot was a goner) the eagles gave up and flew off to a perch in some lakeside willows across the inlet. The coot swam hurriedly to the flock which was feeding near a great blue heron standing basking on a log near the shore.

It was very exciting. Later in the day we went to the Pacific Science Center and saw the train show which was on over the weekend.
Posted by Shannon at 5:58 AM No comments:

Wren loves making art. He draws with an intensity and stamina which is a bit addictive. In the morning he won't eat breakfast unless he is drawing and Heather told me he stuffed his lunch is his mouth as quickly as he could when she said he could only draw "after lunch".

At bedtime he sat on the floor and wanted to draw on paper on top of the books I wanted to read. When I left him alone for a short while he drew all over the door. I shall try and scan a few of his pictures tomorrow. They are mostly long spindly line drawing of 'dinosaurs' and 'keletons' and 'scary halloweens' plus some 'untents' [elephants] and robots. Occasionally, he asks me to draw on the same page he is using and invariably puts on a sad voice and says "not draw on WREN'S ONE". Apparently I fail to see where his drawing is located.

Here is Wren painting at home. He is wearing an old apron of Frosts that I have had hanging around for ages. He only started wearing this since our visit to the Children's Museum on Friday. 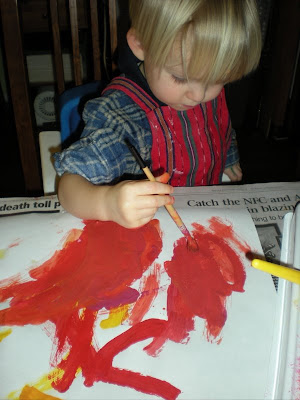 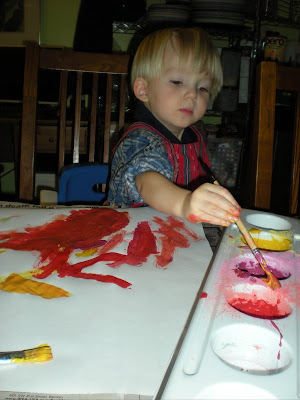 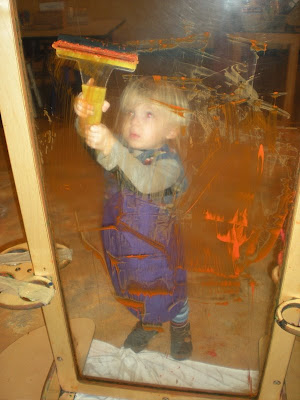 Wren also liked the easels. We do not have an easel at home but I should get one this summer. 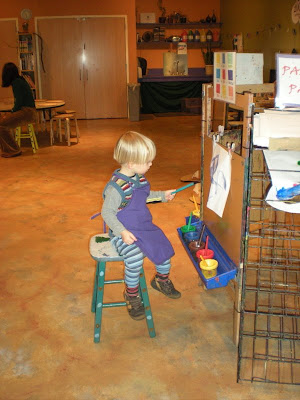 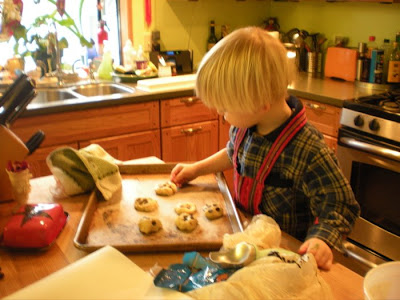 Finally, Yesterday we made some cookies and squeezed chocolate chips into the lemon snickerdoodle cookie dough because they were not wicked enough without them. Today was SUNNY and we did some gardening. I walked to U-village and Frost went on a sleepover to Isaacs. I did not realize how much I missed the sun until I saw it again.
Posted by Shannon at 4:38 PM No comments: