Well, this was something I really didn't see coming. Wren is having trouble gaining weight. When he was just released from hospital I was so proud of his ability to gain weight. He went to the 90th percentile and stayed there till 6 months. By nine months he had fallen back to 75th. He was 48th percentile at 12 months which I put down to lots of recent physical activity and made an effort to feed him more.

He does not want to eat! He just likes nursing in little snacks a few times a day and during the night. I took him to the doctor for a check on his chest since he has had a cold for 2 weeks and was up all last night coughing. The doctor was concerned that he has gained only 3oz in a month. He is now 35th percentile.

He has to go back in a month for another weight check and the pediatrician recommended that we tell cardiology if it continues as this can be an indication of his heart having problems.

My sense is that the relative weight decline negatively correlates with his increased walking. He walks around the block, climbs and chases cats all day. Still, I have to admit that he has very little appetite for solid foods. Today, he ate the following:

I have no idea how to encourage him to eat more. I lay a lot of little bites of good food on his tray and he throws off everything except broccoli and raspberries... oh, and cookies.

Tomorrow I am going to make a rich cream/egg yolk custard and offer that with steamed apple. But why won't he eat if he is not getting the calories he needs? Or is he getting what he thinks he needs nursing but just not building up an appetite. This is what our other ped insinuated... that I should offer butter and creamy foods instead of breastmilk.

Dear Mr McDermott
H. Res 858 is "Supporting the goals and ideals of the National Congenital Heart Defect Awareness Week". Please sign on to this H.Res 858 as a co-sponsor to help get this resolution passed this year.

Our little one year old was born with a potentially fatal heart defect and it was only the great resources of local hospitals that saved his life through surgery. We were lucky and had the condition diagnosed early.

In the wider community, not much is known about heart defects and many children are diagnosed lat and go into severe heart failure. Some require transplants, many die. Please help raise awareness of this important issue.

Hi, We are once again trying to get Congress to pass a National CHD week
resolution.

Representative Robert Andrews has introduced House Resolution 858, "Supporting the goals and ideals of the National Congenital Heart Defect Awareness Week". You can read the resolution here.

Please contact your representatives and ask them to sign on to H.Res 858 as co-sponsors and we'll get this resolution passed this year!

Enter your zipcode into "Find your Representative" at the top left. Once
you've done that, go to their official website (a link will be on the page)
and send them an email message asking them to support H.Res 858.
Posted by Shannon at 12:00 PM 1 comment:

Today Wren walked around the block on his own two little feet. He was very happy to be out in the freezing sun. He followed a cat. He threw pebbles. He explored every element of the urban landscape showing no respect for those invisible boundaries between the public path and the private lawns and pathways. He climbed the stairs of many homes, invaded their shrubbery, thumped the hub-caps of cars, pointed at crows and mainly followed the fluffy grey cat who lives in our neighborhood and chose to escort us on our wanderings.

I picked Wren up on a few occasions to cross roads. I tried to make him hold my hand to cross the road but he won't walk holding hands, tugging and pulling away as I try and grasp his cold fingers. Besides those short periods of being carried( and a few times when I had to turn him around to change direction) he walked the whole way.

Moving slowly, the beautiful blue skies, the smell of woodsmoke, squirrels running around, crows eating peanuts, the quiet streets. It felt like being on vacation in the woods. I am replenished after my days of exhaustion while Frost was on school break.

Wren was exhausted by his walk and is having a good nap.
Posted by Shannon at 8:54 AM No comments:

Pictures in the icy garden

Here are the boys playing in the icey garden yesterday. First, there is Frost (in the morning). 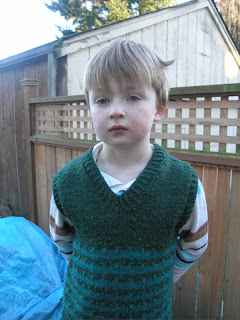 Then we have Frost showing Wren a large icicle. Wren is alarmed by it and has been warning me about it with pointing and hoots. 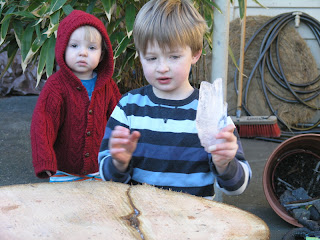 Wren in the afternoon sitting on a chair. He is wearing an owl sweater that used to belong to Luca (Tamsyn's son). She sent it to me when they moved back to Geneva and we are very much enjoying it (as well as the other clothes!) 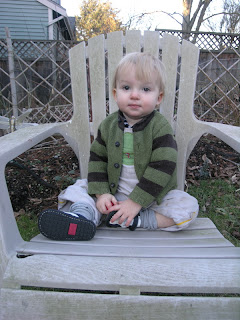 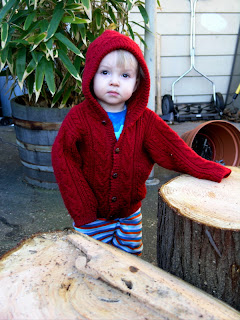 Wren wearing another of Luca's sweaters. He is standing behind some big rounds of cedar from the tree we cut down.
Posted by Shannon at 4:03 AM 4 comments:

Its been a while since I posted about Wren's daily games and Herculean abilities so here goes.

Chatter box in a strange language
Wren can speak his own version of English. It has some resemblance to the one we speak but can require imagination to understand his dialect. He says the following words in his own way:

Understanding Instructions
It is clear that Wren understands what we are saying and has a sense of the routines of the day. Last night, when Josh mentioned getting a book, Wren went to his room and returned with a board book. (By the way, he loves reading books.) I tell him its time for bath and he toddles off to the bathroom. If I suggest he gets a ball he looks around and fetches one for us to play with. Sometimes, if one is not in sight, he lies on his belly and peers under the couch and table to see if a ball is under there. In the early mornings (yes, he is waking pre-dawn again) I suggest he plays with his animals and he goes to the cupboard and starts offering me pigs and Dalmatians and tigers until I turn on the light.

A Fascination with lids
Wren has a few passions that are all his own. Firstly, he is obsessed with lids to containers - the smaller the lid the better. His favorite are bottle lids. He doesn't play with them as much as feel a very very urgent need to replace a lid I remove. If he sees me take the lid off the milk carton to pour some into cereal he lurches forward out of my arms hooting in alarm until he can grab the lid. He replaces it on the carton and twists it to try and fasten it back on. Unfortunately, he continues to hold the lid while twisting both ways so the lid seldom engages on the thread but I manage to satisfy him by screwing it on and putting it away. He is really upset if I leave a lid off. For example, while making vegemite toast I often leave the vegemite jar open. He will yell and hoot until I allow him to replace it.

Fear of foam and cream and slime
Wren's greatest antipathy is for slimy, creamy or sticky things. He hates having anything clammy and wet on his hands. This week the poor babysitter offered him fingerpainting. He was curious until he touched the paint and it remained on his hand. Then he became inconsolable until cleaned up. He dislikes foamy soap on his hands and is actually afraid of the small pieces of soap left in the soap container since he had a bad experience with them (I don't know what). He is horrified by the kids shaving cream soap Frost played with in the bath once. The moment it is squirted into the water or on the side of the bath he cries and reaches out out out, signing "all done, all done" and trying to climb out if I am not quick enough. He does not mind dry dirt or mess on his clothes... its just the wet squishy stuff on his hands that bothers him.

Pounce pounce BONK!
Wren loves to pounce on soft things. Put him on the bed near a stuffed animal or pillow and he stretches tall and makes the most almighty belly-flop into the soft thing. He does not have good aim and sometimes pounces head long into the side of the bed or smashes his head against my nose or Joshua's eyebrow as he overshoots our soft bellies. Still, the joy of pouncing is eternal and he can be distracted from just about any bad mood by a (naked) bed pounce.

Cat bashing, or "gentle" flesh and fur clutching
He still loves the cats but is only marginally better at molesting them. He throws things at them and chases them under tables but if reminded he clutches their fur gently and strokes their air above their bodies for a few moments. Then it is back to grabbing chunks of cat or thudding in joyful hoots. The only exception is when Kitty Haiku is sleeping on one of the dining room table chairs. SHe likes the nook when a chair is pushed in under the table and Wren has learned from a painful scratch that she is not very tolerant of being abused while there. So, every morning he checks under the table and if he finds Kitty Haiku asleep on a chair he shouts and points in a warning cry until I acknowledge that its "kitty, sleeping, carful!" Then he walks off, satisfied.

Throwing dangers
It is not only the cats who are in danger from Wren's enjoyment of throwing. Wren is a good thrower but is unable to differentiate between safe and unthrowable objects. While it seems self-evident to most of us that balls are for throwing, Frost and I suffer daily injuries from being hit on the head or body with heavy missiles such as blocks, plastic animals, cups, books and even cutlery.

Wren is about to wake from his nap so I shall have to go and get him up. I shall try and post our pictures from playing outside in the garden yesterday. It is very cold in Seattle at the moment with sheets of ice remaining all day in the shade. Still, we are so excited by dry sunshiney days that we are outside at every opportunity getting red cheeks and lowering reserves of hot chocolate in the pantry.
Posted by Shannon at 3:23 AM No comments:

Its been a while since I posted about Wren's daily

Wren can speak. He says the following words:

Understanding Instructions
It is clear that Wren understands what we are saying and has a sense of the routines of the day. Last night, when Josh mentioned getting a book, Wren went to his room and returned with a board book. By the way, he loves reading books. I tell him its time for bath and he toddles off to the bathroom. If I suggest he gets a ball he looks around and fetches one for us to play with. Sometimes, if one is not in sight, he lies on him belly and peers under the couch and table to see if a ball is under there.
Posted by Shannon at 1:49 AM No comments: