The Dinosaur Exhibit BY WREN

This blog post is by Wren.  He is telling me about the minecraft dinosaur exhibit he has created.

WREN SAYS:
"This Minecraft world has a backstory.   The backstory is that we had this giant machine and found a giant dinosaur bone and we don't know what it is.  It is a whole dinosaur bone.  A GIANT dinosaur. 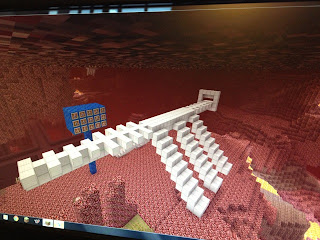 We collected DNA from the dinosaur with our DNA collector.  DNA is like stuff - everything has DNA and scientists use DNA to figure the genealogy about the thing and can make eggs out of the DNA. We put the DNA in our DNA Collector.   The bottles that are blue are filled with DNA and the ones that are white they are still trying to collect it.  Its not real.  Its my imaginging that its a machine that looks around to find DNA.

Here is the DNA Collector: 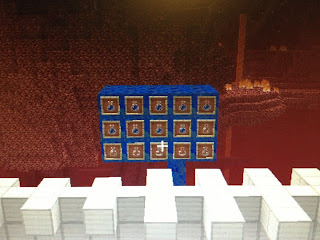 In my chest we have three dinosaur eggs because we used three to build a dinosaur exhibit.  There are three in my exhibit.  The one area is closed and it has a sign.  The sign says "CLOSED - FAILED DINOSAURS".  This means that the dinosaurs are failed they are like zombie-ish - not looking like dinosaurs, they are like globs. 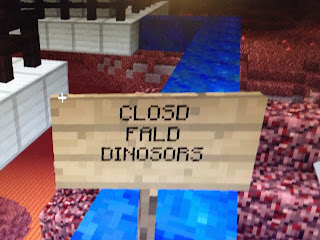 The dinosaurs in this cage are velociraptors which are dinosaur kind of birds.  They are moving so its hard to take a picture.  [Here is a picture when Wren broke the cage for a moment to let me see inside.  He closed it again quickly so the Velociraptor did not get out.] 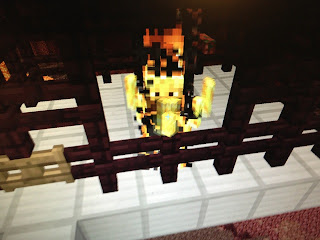 This exhibits is T-Rexes.  My brother told me how to make them when I didn't know.  They are the biggest things other than GHASTS so I made Iron golems into T-Rexes with iron blocks.  If you put a pumpkin on top they turn into Iron Golems.  These are Iron Golems but I am imaginging they are T-Rexes. 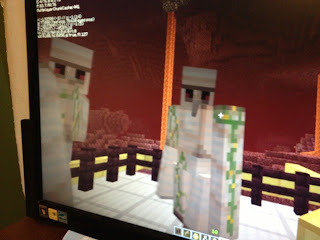 So, that is the backstory for my dinosaur exhibit.
BY WREN
Posted by Shannon at 3:59 AM 3 comments: