Day Three and a Visit to the Zoo

Frost came off the bus today and said school was "good!"

They all discussed their favorite books and he has learned the names of 2 kids. One is Carter and one is Nelson. He is very pleased. He sat next to Nelson on the bus for two days in a row which made life seem predictable again. Plus, he discovered how to get to the restroom and it worked.

Wren and I went to the zoo and saw the snakes, the bats, snow leopard cubs and the Australian birds.

This is my second iMovie. I am trying subtitles. I think movies in blogs are a bit of a cop out so I shan't be doing this for too long but its great for my family who live abroad and don't see us

Frost had a better day today, one he described as "50/50 bad and good". The good seemed to outweigh the bad in his stories so I think it was a step in the right direction.

Unlike yesterday, he did some work today. They are doing ART - working with carbon paper and watching presentations on a slide-show. He seemed excited by the potential of carbon copying.

He also knew the names of some kids and sat next to one on the bus-ride home. The boy he sat next to was described as "very funny and very naughty. He does really bad pranks." I wonder where this will lead. I sincerely hope he did not really feed his baby sister mud pudding as he claimed.

Frost's major complaint today was not knowing where or when to use the bathroom. Frost finds the idea of asking someone about the bathroom very embarrassing and does not want to talk to his teacher about it in public. Also, he worried about asking for a hall pass to use the bathroom because "I know where it is but I don't know how to get there."

He claims that you are not allowed to go at recess because you have to stay outside on the playground. I am not sure when they are really supposed to go but we are going to go into school early and try and figure this out. At last, a task I can handle.
Posted by Shannon at 2:23 PM No comments:

Yesterday Frost started at his new school. His old school was a small co-operative with less than 40 children in the first three grades. He graduated after 2nd grade. The best words to describe it are 'intimate', 'flexible', and 'rich'. His new school has 70 kids in 3rd grade alone (split over three classes). It is a traditional public school building with shiny floors and industrial paintwork. There is a big gym with yellow wood floors and doors which swing like a hospital.
Frost is one of 29 kids (17 boys and 12 girls) in his class. In his class he is one of only two new kids. He has a bus service - a yellow bus - which will take him from our neighborhood to school every morning and return him to the nearest cross-street at 4pm in the afternoon. I drove him in on his first day and found his class. He was given a nametag showing his class and teacher's name. Off he went. 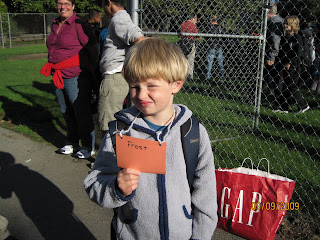 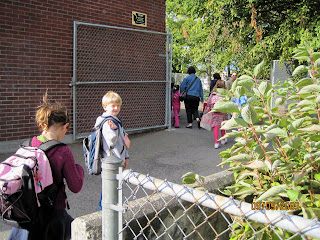 He caught the schoolbus home and I met him at the corner. His first words when he got off the bus were "my first day of school was a nightmare". I think he was being dramatic because he had trouble finding his bus after school (he left his group which was being walked to the bus to find it himself and went to the wrong rank of buses). He asked for help and found another row of buses including his bus.
His complaints?
1) He didn't know anyone.
2) He didn't have a friend.
3) He didn't have anyone to play with at recess.
4) He didn't make any friends.
5) Everyone had a friend already.
6) They didn't do any work.
7) They had to listen all day.
8) He nearly missed the bus and was scared.
9) He felt sick and couldn't eat.
10) He forgot his water bottle in the classroom so he couldn't drink all day.
Ok, some of this is expected, some is wrong but I am sad. I emailed his teacher and she is looking out for him today and hopes to help him connect with some particular kids. I have the names of some boys he seems to like and if I can find their numbers or email we shall have to try the playdate route.
More this afternoon when we have the second installment of the school transition "nightmare".
Posted by Shannon at 6:52 AM No comments:

Last weekend we went up to Moses Lake for a concert by the Dave Mathews Band. I've been missing out on writing and so I have a few pictures to tide the blog over until tomorrow when I hope to have time to speak about it.
Halloween is coming
Frost is very excited about Halloween. He is counting down till October 31st and has been nagging to look through the decorations downstairs. Last week I took him and Wren to Costume and Display which has a fabulous range of dress-ups and decorations. Wren was excited to try the weapons and the monkey mask. Frost bought a Pirate Costume which I will save till he wears it. 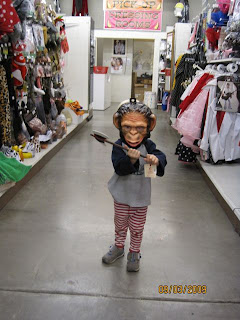 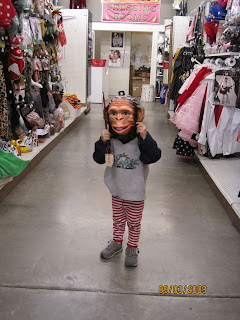 I am a Lego addict
While posting an item for sale on Craigslist I came across a man offering a large box of Lego for $15. It was too tempting to pass on so I called and happened to be the first one. We drove out to buy it this evening and the boys are very excited by it. I washed it in the bath because it was very sticky - as if a bottle of soda had been spilled on it. There were also many Mega Blocks mixed in which I shall have to sort out before they contaminate our collection. 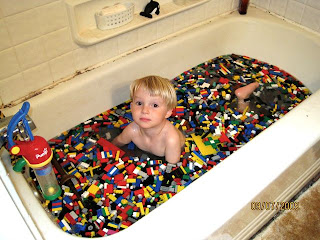 Quick catchup:
1) Josh and I are enjoying watching Defying Gravity on ABC. Its a great new Sci-fi show.
2) After endless cogitation and indecision I have bought a MacBook Pro (new). I received an education discount which means I was given a free iPod Touch which I have passed on to Frost to listen to music in his room.
3) We stayed Saturday night in Moses Lake while I went to a DMB concert.
4) Its raining, a lot. The chickens hate it but I am enjoying drinking Caro all day and getting out my fleece PJs. I turned the furnace on but it didn't kick in because it is still too warm.
5) I have an appointment for biometric scanning tomorrow. Its part of my US citizenship application.
6) We are taking quotes from people who could help us remodel the bathroom.
7) Frost starts school this Wednesday. He is reading a lot and being lazy.
Till tomorrow.
Posted by Shannon at 2:44 PM 2 comments: