We spent last weekend at Camp Orkila with Frost's old school, Kapka. Camp Orkila is a YMCA outdoor camp on Orcas Island, in the San Juan Islands. It takes about 4 hours to get there from Seattle - driving to Anacortes and then catching an inter-island ferry on a trip which takes about 90 minutes.
The weather is fickle in spring. On prior years it has threatened rain during the day and been cold. I have never been tempted to swim and last year my kayaking was cancelled due to wind. This weekend was remarkable for its cool clear windless sun. It was the kind of weather that makes everyone want a boat and a vacation cabin and to take pictures into which they can photoshop orcas and seals and small white-sailed dinghies.
We had a lovely time and even the clear bright nights were tolerable in our tent.
Food
One of my favorite things about Camp is having all the food prepared for me. You come into a big hall at meal time and its all there in big silver vats. And its usual-kid friendly. Since my kids eat weird food Frost would sometimes eat nothing but desert and Wren would eat only oranges and a pancake, but at Camp Orkila I didn't have to bother. There was no more food so they ate what they wanted and nothing more.
Here is Wren in the hall eating ORANGE! Note, he is wearing his cape over his pajamas. This is his favorite outfit. Many days I have to bribe him to get into real clothes by afternoon. 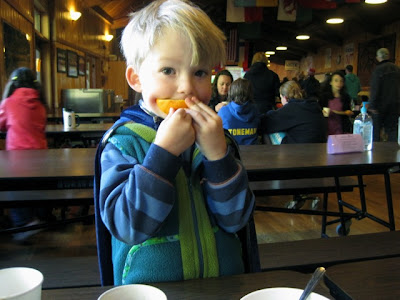 Here is Josh bringing Wren to lunch or breakfast which was at 8am every day. I love breakfast on a schedule and it included hot chocolate, eggs, pancakes and lots of parents staggering around saying they didn't get any sleep because of: 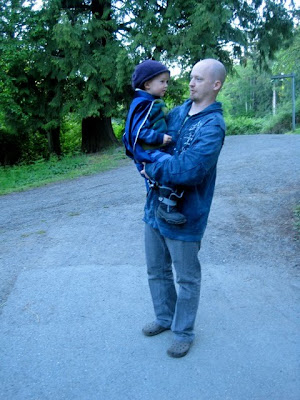 Plants Versus...
We were a bit naughty and brought the iPad to camp. Wren spent early mornings and a few afternoon naptimes playing what he calls "Plants-versus". Popular culture calls this Plants Versus Zombies and Frost calls its PVZ. Plantsversus is our family addiction. Actually I am going to pause my blog update to play a level. I am on the roof level. 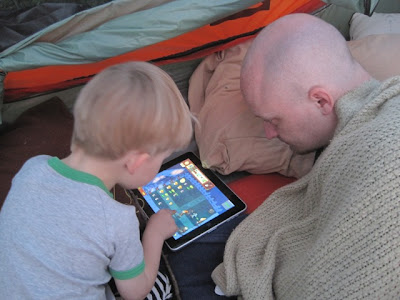 "Daddy, I do not mind if the zombies EAT MY BRAINS"
Fashionista
Last week, Wren wore a sweater Mum bought for us in Australia at an art show. I neglected it over winter because it was lightweight but now that its milder it has come out. This sweater has attracted a lot of excitement in Seattle. I was asked where I bought it, if I could copy it, if it was a Mondrian design and told that it was the most fabulous thing ever. It was especially admired when worn with striped black and white leggings. 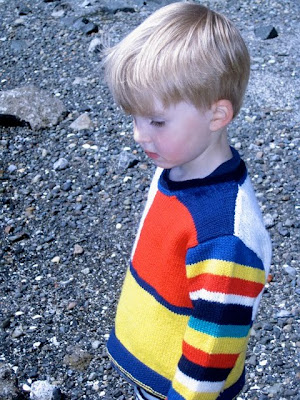 Amigos
The best thing about Camp Orkila is that the kids can run freely with their friends. I barely saw Frost on Saturday - he ran with his pack of boys - and Wren was often gone for half an hour with his 'friends' or 'small mothers' - Eve and Ingrid. The girls looked after Wren and made up missions and games for him. At mealtimes he cried when he could not find "my friends" and at times would not come and play with me because he had "a mission with The Big Boys!" 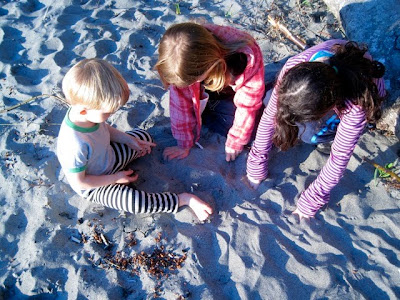 Wren, Ingrid and Eve at the beach 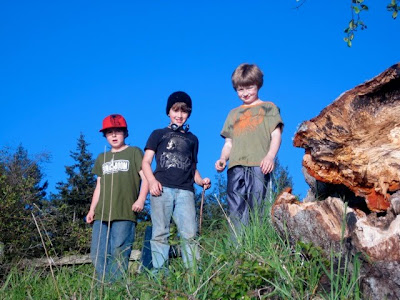 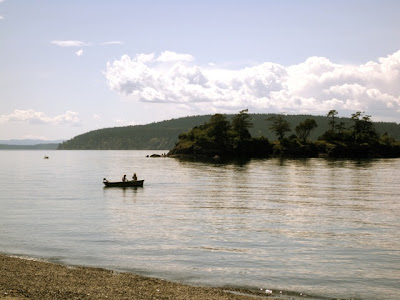 I wanted to type in some text with this picture but I don't have photoshop anymore. Boo hoo. Anyway, it shows the rowboat containing Frost, Zephyr, Isaac and Mike. Mike is lying back in the bow and is the only adult on board. Zephyr did a valiant deed and rowed the boys to the island which they named according to imagined Pirate histories.
Meanwhile, I went on an idyllic paddle for a few hours in a group. We saw seals, a loon, flocks of turkey vultures and a bald eagle diving at an otter or ferret-like animal on the beach. I now aspire to do a kayaking tour in the San Juans at some point. There are many state parks only accessible by water and a paddling route around the islands leading from campsite to campsite, island to island. Wouldn't that be fun? If Josh wasn't keen I am sure I would find some other takers? Right? 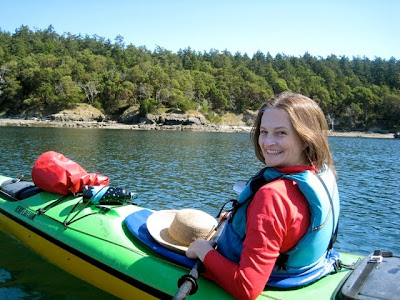 The Sea, The Sea
Wren said his favorite part of Camp Orkila was the beach. It is good to be near the sea. I am not sure whether it is good for everyone or just good if you have lived near the sea as a child. Wren liked to play on the beach whenever he could.
Here he wears his cape. 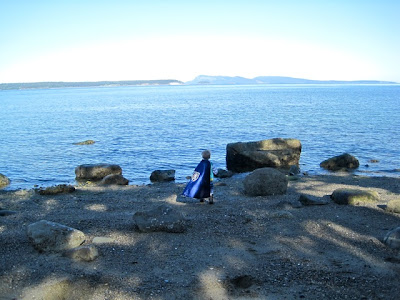 The same place at sunset with Wren, Eve and Ingrid (not sure who the larger boy is). 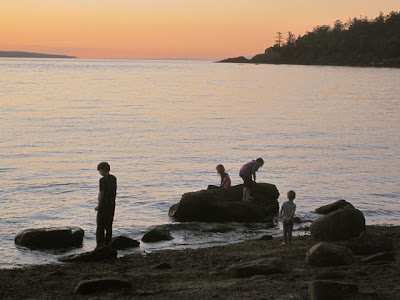 Fires
One of the most persistent "games" for the bigger boys was firemaking. There were various rules around fires but the boys were interested in creating and protecting their fires. At many points there were "girl" fires and "boy" fires - with circles drawn in clay dust around them. Boys chased girls with balls of cut grasss (the lawns had been mown shortly before we arrived) and the girls retaliated with mock attacks. Simply the threat that "the girls are planning something!" would be enough to unleash a flurry of strategy and running around. Wren and some other boys made bows with twigs and string. Wren still has his bow and runs around pretending to shoot things and people with it. 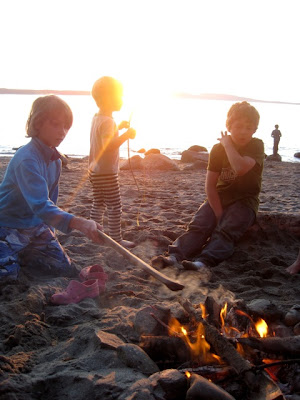 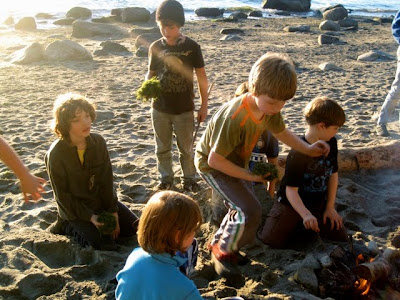 Frost with a handful of grass in the Defend the Fire From Girls game. Zephyr had a "Survival Kit" in his backpack containing string, tape, a knife, matches etc. This became the center for many games. Frost would like a knife but is still very concerned about being cut and does not really have any idea how to use it. Perhaps for this birthday? 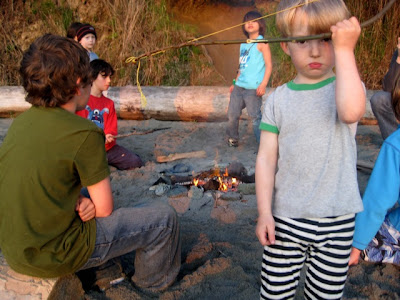 Here is Wren with his bow at the boy fire. You can see Alex, Jack and Benjamin to his left.
As we left Orcas Island there was one dramatic moment. I had waited 2 hours in the ferry line (you have to, to get on the midday sailing) and as the line advanced I turned on the car and it went "click". We had a flat battery.
There was lots of cussing and running around but miraculously Josh managed to jumpstart the car in time for us to get on the ferry in time. Phew. We were all a bit hyped after that and it was good to be home.
There was news at home - a drive-by shooting - apparently random shots fired into a family home down the street. Still, the work and school season continues and we are left with memories of fires and kayaks and a twig bow.
Posted by Shannon at 3:02 PM 4 comments:

A post on Camp Orkila is taking time. Meanwhile, Wren enjoyed the clay at Camp Orkila. This is a tiny little movie made with my point and shoot camera in a crowd of kids. It is mainly for Mum who will tell me that I must sign Wren up for pottery class, which I am trying to do. It was a lot of fun for me too although I loathed pottery class when I was a kid.

There was this strange woman who taught it and I was dumped off there weekly to play with lumps of clay and mould them into uninspired objects which I felt obliged to hang onto. I did not connect with clay. It was in a shed off her garage. She had rules and I didn't like them. I think she told me off once about something but I cannot recall what it was.

Now, if someone had sent me to a painting or drawing class I would have had fun. Why is it so hard to see who our kids are becoming and just go with it?

The need to give our kids opportunities and experience speaks more about us than them.
Posted by Shannon at 2:41 PM No comments: