The Shimmer of All Things

Time does not take pity on a blogger. Each day you write not, events accrue until you face a metaphorical stack of moments to account for. Not that accounting is my business. I like to keep the tally in a more general sense. Still, with a birthday, a party, a gelatinous cube [cake], a newly ferocious tiger, a visit to the farm and the "battle of the monkeyman" passing unremarked, I feel I have some catching up to do.

I haven't even commented on that whole episode of the Icelandic volcano! Wren has been very concerned with volcanoes for a long while so the regular appearance of volcanoes in the local paper was a source of great excitement. I felt personally connected via Facebook where my friend Frances, living in Iceland, posted her experiences, and then again when I learned that Jonathan (Yes, the same long ago Jonathan) who is now a pilot (yes, indeed, the marvels) was grounded at Luton airport. This was all very thrilling. Off and on during the days of ash induced quietude (somewhere, quietude), I pretended I was being interviewed and had to say the name of the volcano and blundered it like a broken down telephone:

Meanwhile, out of the shadow of the ash, Wren and I went out to Fox Hollow Farm with his friend Henry. Henry was accompanied by Jen (or rather, we accompanied Jen and Henry). It was wet, decidedly muddy, and the beasts were restive being visited by toddlers. Since our visit to Australia (during which Mum worried about her puppy but Wren remains traumatized) Wren has been phobic about dogs. Unfortunately, sheep, pigs and even goats remind him of dogs with teeth so he did not want to visit with them. Even more unfortunately, a sheep escaped from the barn and barreled down the path towards us. Heroically, I stopped the sheep and held it until the farmhand appeared and restored it to its mates.

Thankfully, rabbits and ducks do no took like dogs. Wren loved the rabbits, whose beady little eyes stared back guardedly and who, despite their fur, did not like being cuddled. 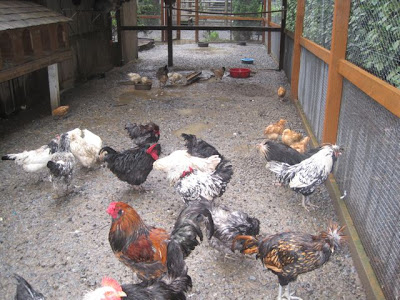 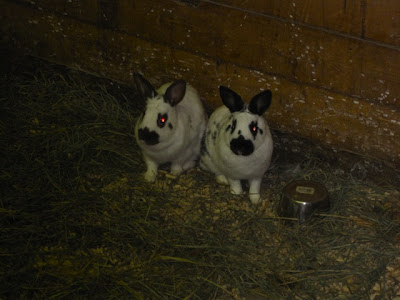 The ducks slurped in the mud. In the loft of the barn, there was a rope across some haybales. The idea is that a child will climb the haybales and then swing across the room, a la Tarzan. Wren climbed up the bale, swung off and fell into a chasm between two bales. This made him cry. 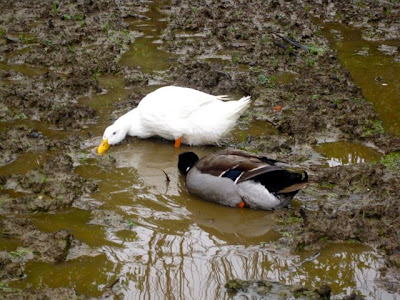 After the falling and the fearing, the highlight of the visit was driving the battery operated truck around the driveway. Wren drove a short distance and did not reveal a knack for steering. Henry drove around a few times, with minor corrections from Jen. Wren held on tight. Both boys liked it best when they had a ball in the back of the truck to do a delivery. Henry delivered the ball to the front steps of the farmhouse. 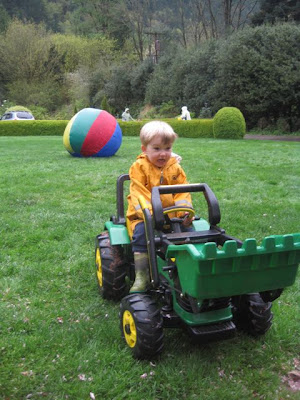 I do believe he enjoyed this. 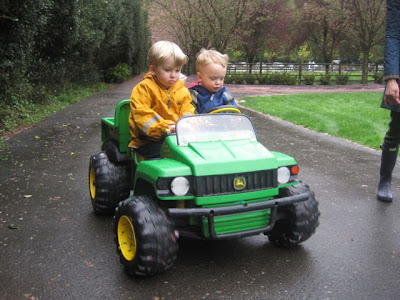 After that we did the Seattle Suburban thing and drove through an Espresso stand to ensure optimum levels of caffeination for the drive back over 520.

Still to come....... the gelatinous birthday and some cake.

Posted by Shannon at 8:29 AM No comments: