My mother is back from vacation and I shall have to resume my daily postings on the grandchildren. Mum has this super cheap "phone card" which is great but for the haunted house echo which has us speaking on top of each other or fading in and out from time to time. I need to write so she knows what I am talking about. Actually, I don't have time to post much now other than to say that all of us are well and have been enjoying some rare sunshine and walks.

This afternoon at 4.30pm Frost said "God, what time is it? Its so light?" When I told him the time he was stunned. "But its not dark?" he said. I explained that it had been weeks since we had much sun and he wasn't used to it staying light a bit longer. Wren looked out the window and said "go outside" which he did.

Seattle Children's Museum
This morning I took Wren to the Children's Museum. It was his first visit and he enjoyed the Imagination Art Studio and the car you can drive best. I have some lovely pictures of him painting. He also made a collage on an old LP. Strangely, the material that the children were given to cut collage from was National Geographic Magazines from the 1950s and 60s. One, from 1953 had an article about a trip down through Africa and included a story and pictures on Cape Town and Durban. I cut out some pictures from Muizenberg Beach in 1953 and stuck them on Wren's LP. I also tore out some sections to take home. There was another fascinating article in the 1966 edition. Apparently in March 1966 (shortly before I was born) Scientists in Seattle captured an Orca and kept it 'sea caged' at the wharf for tourists to watch. Bizarre. I am thinking of sending the article (which I stole from the toddlers snippety snip) to the Seattle Times (since the PI is closing) to do a follow-up story. Orcas are always in the local news!

Support Group for Shones Syndrome
I have started a google group for families with children who have Shones Syndrome. I have been learning a lot from email contact with a few of them and hope that others will join and inspire and inform with their experiences. Here is the group link. We have no posts yet but a few members.

http://groups.google.com/group/shones-support
Posted by Shannon at 4:21 PM No comments:

Wren has been particularly sweet on Frost recently. Everything Frost does or has Wren wants to do or have. This makes it hard for Frost to do some of his own things and has reduced the time Wren spends in age-appropriate (normal toddler) games. When Frost had a playdate with Alex recently, Wren came running in distress to tell me "Mummy mummy HELP HELP Wren don't have a gun!" and he loves to "play with guys" which are playmobil figures and transformers.

He notices that Frost does not sit in a booster seat at table and has taken to sitting in the chair next to Frost whenever he can. He also likes to read near Frost and watch him playing Lego Batman on thee Wii. I know this is inappropriate but he jumps up and down and shouts "BatMAN!!!" Here are the boys eating breakfast together. 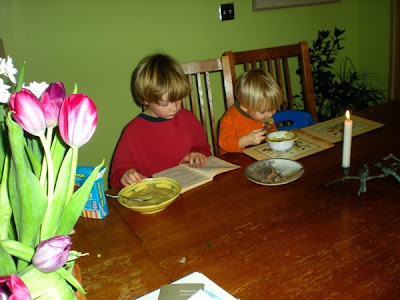 And here they are in a big cardboard box. Wren used this box as an airplane. All the animals are passengers but after Frost climbed in too it was very squashed. 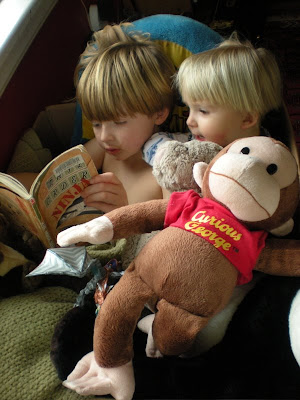 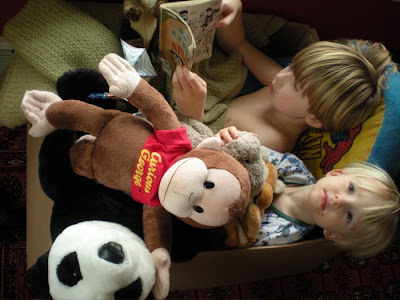 Frost, the reading addict
You may have noticed in the previous pictures that Frost has his nose in a book. This is not a co-incidence. Frost has his nose in a book almost all the time he is not having his screentime. He has become a reading addict and I have had to ban books at dinner and take away some books because he cannot hear me, get ready for school or do his chores while a book is near. Tonight he read his book [Warriors - Into the Wild] in the bath for half and hour then begged to be allowed to stay up a bit longer to read at bedtime and I caught him sneaking his light on to read some more.

Running and Jumping are EXCELLENT
Meanwhile, Wren is working at prefecting the run and leap. He is able to run and JUMP and land two legged like a frog. He loves to do this and to take a series of hops across the room. Sometimes I jump too and he finds this very exciting. His word of the day was "excellent" - he kept saying things were "excellent." He thinks that the iPod recordings of the Wiggles are pretty great too. I have made a Wren's Favorites Playlist which is available on the dock in the kitchen and we often dance or at least watch the iPod while it plays. His favorite tracks include "Chugga chugga big red car" and "Old Dan Tucker". We also dance to the knickerbocker song. Tomorrow, I will surprise him with a new download from iTunes - "Cold Spaghetti.
Posted by Shannon at 2:47 PM No comments:

The Sad Saga of the Duck-Godzilla Umbrella

We've been having a bit of rain recently but since its been pretty mild I have been taking Frost and Wren out walking. He loves using his duck umbrella. Its made by a company called Pylones and had a duck head and a duck foot handle and has purpled feathers inside the plastic canopy. 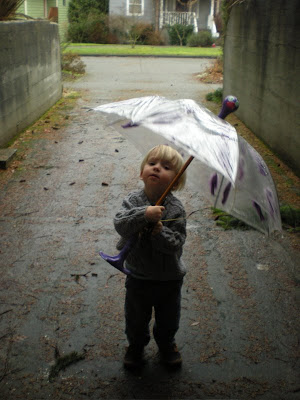 Unfortunately, when I shut the door of the minivan one night the duck umbrella was in the door and it broke with a mighty crunch. The damage was cosmetic but as you can see from the picture below, it was quite tragic. I felt very bad to have broken it but Wren said "its okay, Mummy okay? need GLUE" and we tried to get over it. For a few days duck-head lived a life apart from the umbrella - while Frost kept suggesting I glue it. To my mind this was clearly impossible. 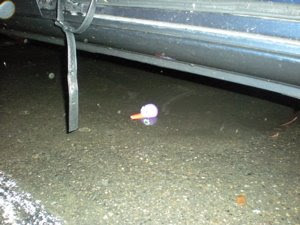 To make the best of a bad situation, I suggested we put a dinosaur head on the umbrella to fix it. Wren is very happy with the godzilla head Josh attached this evening. 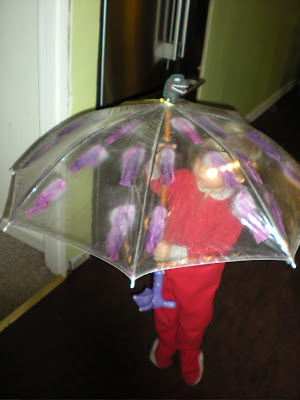 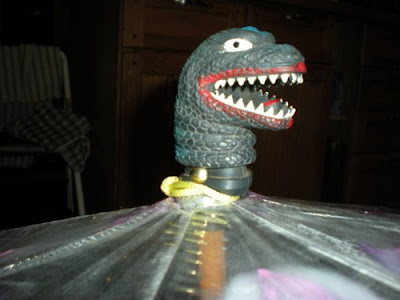 Skateboarding
Today, we walked to Top Pot for donuts and Frost brought his skateboard with him. On the first slight incline he rolled down without falling off. He was very tentative and wanted lots of reassurance about how well he was doing. After a few rolls he learned how to steer the board and went down some steeper hills. He was very pleased and after the donuts he hopped on his board with great confidence. He even learned to steer to avoid holes in the sidewalk. After each descent Wren ran down the hill towards Frost to "bring him back".
Posted by Shannon at 3:25 PM No comments: