Wren gave me the best present by sleeping in until 6am this morning. This was after Frost woke at 3.30am crying with "a very sore foot, underneath". We diagnosed this as growing pains not a cramp and he ended the night in our bed.

Many presents have been had. Frost says that "there are way too many Playmobil guys!" This is due to the massive box of Playmobil "guys" (confederates, native americans and civil war dudes in their fort) which Mum bought for him from eBay while she was here.

He is a bit overwhelmed.

Wren loves his Elmo who shouts ($3 from Value Village) his Wiggles Big Red Car and Frost's wobble board.

I have just whipped up the Brandy Butter and we are listening to carols. Joshua thinks that the Cambridge Choir is singing "Osama, Osama, Osama in Excelsius." I explained it was H-O-S-A-N-N-A. The tofurky roast and vegetables will be another hour so I am going to gift myself with a shower, cup of tea and some Elizabeth George.
Posted by Shannon at 7:51 AM 3 comments:

We had a very Christmassy Day today. It started off with the last pocket in the Advent Calendar for Wren. I made him one this year filled with a few Playmobil animal sets and a bit of Candy (don't do that again if the Calendar is to be opened at Breakfast). Today he received a mother fox. You can see him opening it and checking all the empty boxes in case he left some candy in there. When I made it I hadn't realized how much foliage there is in a Playmobil set. This is one bushy advent forest! 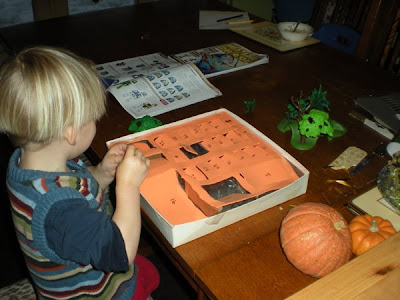 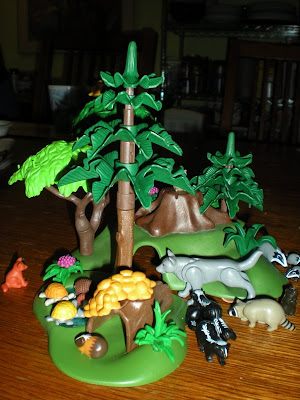 After that we had a few disasters. I made gingerbread but found out, half way through, that there was no ground ginger. I had to adapt and grate fresh ginger. Then Wren decided to dump molasses and eat it or dump flour and eat it or... you get the picture.

Afterwards we had kippers for breakfast. YES KIPPERS. I love kippers and bought them at the British Pantry in Redmond yesterday. They were marked 99p but I paid $5. It was worth every cent. I sang this nursery rhyme to Wren and he demanded more and more and more kipper.

Those Nutcrackers are Ornaments!
Then there was the next disaster. The nutcracker soldier we were using to crack hazelnuts broke in half. Actually, he became wonky, wobbled and then lost his head and an arm. Frost and I deduced that those painted soldier nutcrackers are ornaments not real nutcrackers. It was doing a lousy job cracking nuts anyway. I shall have to buy the family a nutcracker now. We are really keen on doing it and have two bags of nuts in shells!

Bath bombs explode
I took down another craft from a few days before - the bath fizzies we had made from witchhazel, citric acid and baking soda. They smelled great but had subsided into a large pancake instead of being nice egg-shapes. They still work so its not so bad but I don't understand what we did wrong.

Thankfully, Lauren and Ruben invited us over for a fabulous Christmas Eve Mexican dinner with more food than I could even sample. They even made their own tortillas and tamales. Wren and I ate a lot and Wren found his vocation as a rock musician playing Rock Band. 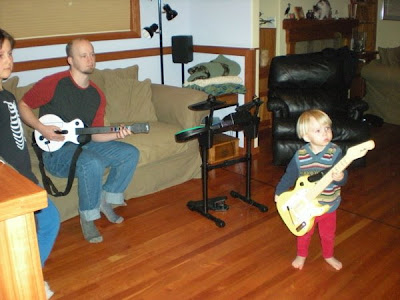 Snow Update
Still snowing this morning but its now turned to rain. The snow is slushy but still covers the street. I expect this thaw to continue tomorrow if it doesn't cool down considerably. Frost spent much of the day having snowball fights with Alexander and our neighbour, Elias. Here is a movie from a few days ago showing Josh and Wren sledding at Dahl field.

Eight and a half inches!!!

I am hoping to leave the house today to do a bit of pre-Christmas food buying (we don't have the tofurky yet!) and I am sure the shops will be swamped once it thaws. Frost is also hoping to get a few more Christmas presents (for Wren, Daddy and a couple of friends). Still, we won't be going more than a few miles from home with the chains on.

Here is a picture of Wren and I measuring snow depth after breakfast. I am still in my PJs and Wren has snow on his bottom. 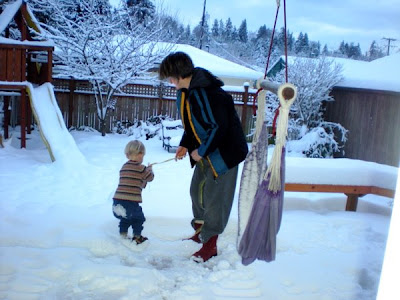 If you want to follow our exciting weather I recommend this link.
Posted by Shannon at 1:56 AM 3 comments:

This is our neighborhood covered in snow. We are heading off for a walk in the morning around 9.30am but it felt as if we were in the mountains. All the trees were snow covered and there were very few people about. 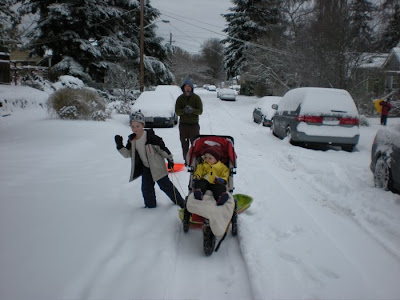 Now, this evening, its been snowing pretty heavily for hours and we had about 5" overnight. Since I moved to Seattle we have had only a few inches of snow each year. This storm has been giving us snow, ice, serious cold and icicles for a week and telling you about our daily sledding is getting boring. Here are Frost and Elias at the small hill in a nearby park [top] and Frost and Joshua [below].

Although he enjoyed the park, Frost liked to go down the steepest stree hill over a snow ramp. He was giving me nightmares - flying about 3 feet up into the air and crashing downhill. He shouted "that was AWESOME" so many times that Wren has started doing it. I can see him having a career in snowboarding. He just loved the ramps and was getting a lot of positive feedback from adults 'guarding' the routes. I am not encouraging him and banned head first jumps after his first success in aiming straight up the steepest part. 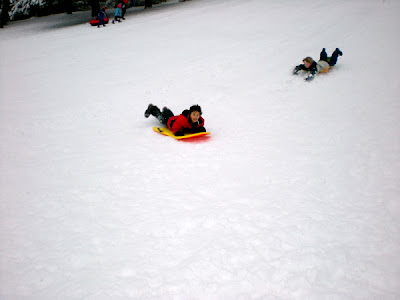 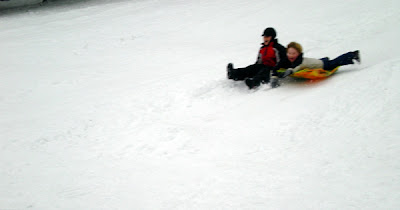 Our neighborhood was pretty snowbound today. The main roads are somewhat passable but cars were sliding backwards down the hill on 75th and most people out there had AWD and/or chains on. The snow was deep enough to make walking difficult and had a thin crust of ice on top from some periods of freezing rain. There was no new snow in the morning but it started up again this afternoon and we have had another 2-3" already.

Frost is still loving it and Wren enjoys making snowmen in his sensory table. We cut down tiny carrots for the noses and he had peppercorn eyes. I hope we are able to make a big snowman in the back yard tomorrow. The crunchy snow crust made it hard to roll balls of it today. Wren was not as happy going out, even in his stroller. He was cold (he had gloves on but they became wet) and didn't like the crunching noise of the ice-crusted snow. It was hard to push him through the snow too - it was 5" deep in some places. 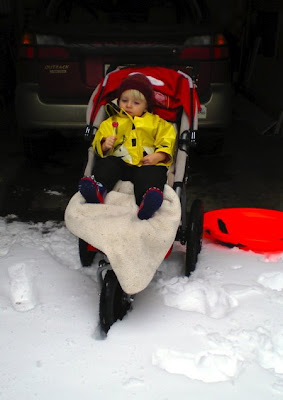 He has a lollipop for compensation.
Posted by Shannon at 2:40 PM No comments:

This morning we made the gingerbread house. I assembled it with Wren while Frost was still asleep although if I had known how easy it would be I would have waited for him. Typically, I spend an hour mixing the royal icing and then propping the house up as it leans and sags. It takes hours to dry and even then is at risk of catastrophe. I have tried many different "kits" and have made my own from scratch but it has always been the same experience UNTIL THIS YEAR! I must always buy this kit (but can't recall where I got it). Its by "Create a Treat." Mum, do you remember? It is different in that it has a base and the icing is mixed and comes in a bag you snip and use straight away. It was ready to decorate in 15 minutes.

Predictably, the candy and decorating was the part that Frost and Wren liked best. Here they are decorating their own sides. 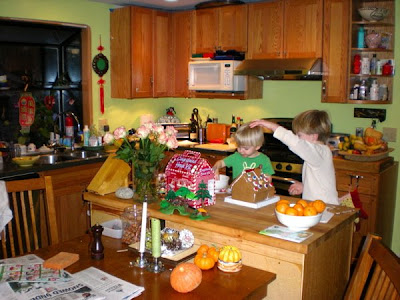 Frost's side is on the right. He was careful to make the colors of the candy left-right symmetrical. Wren liked to squeeze his own icing / frosting onto the house and was very careful to put candy in each dollop. I put it on the roof for him. 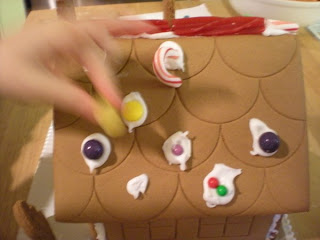 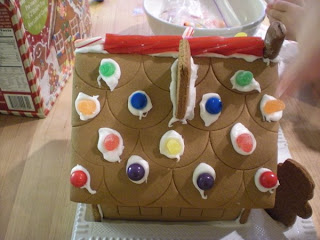 After we had used all the candy Wren checked the box in case there was any more. 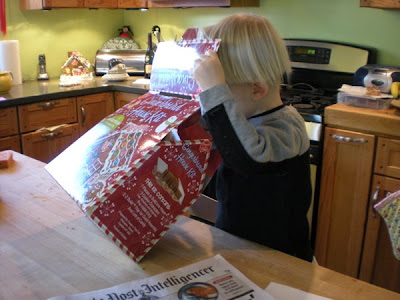 Here is the final gingerbread house. It is the most beautiful one we have ever made.
All the candy came with it! The boys also decorated the piece at the front and we ate it for Tea Party today. Well, honestly I ate the gingerbread and they ate the candy. 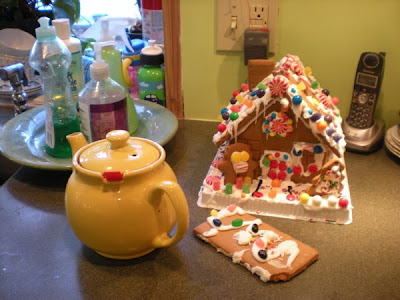 More Snow
We have had about 2" of snow this evening and Frost and I had a great hour of twilight and early dark sledding at the hill in Dahl field. It is going to be superb sledding tomorrow. Snow is still falling and we are very excited.
Posted by Shannon at 3:19 PM 3 comments:

When I went out to fetch the newspaper this morning the local weather station in Bryant was reading 15 degrees. This is Seattle?

It is a clear dry day today but the forecast is for an ice-storm, wind-storm, blizzard combo starting tonight.

I think it is time to get my errands run today and to leave the chains on.

How are my other Seattle friends doing with all this?
Posted by Shannon at 2:11 AM 2 comments: