Pictures of Birdwatching and Christmas

I promised some pictures in my last post. Here they are! 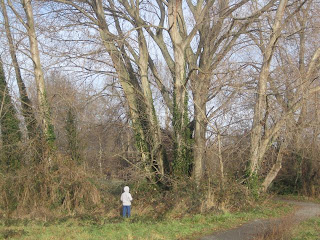 Frost pursues the marsh Wren into a thicket. His feet are in the brambles and he is making a sucking lip cheeping sound "as a way to call the bird like Granny does." The bird does not emerge. 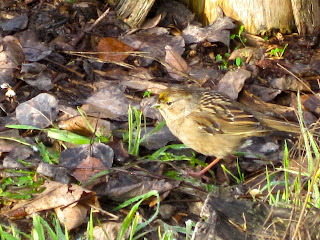 A little flock of golden crowned sparrows was so bold as to come right to our feet. We threw cookie crumbs for them but they thought we were attacking. Later, they returned and ate them. This is the one and only time I have managed a decent picture of a wild bird with my point and shoot camera. 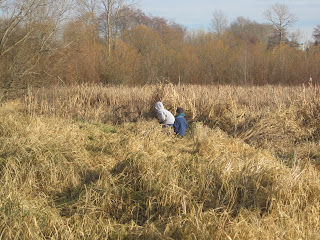 Here the boys stalk the marsh Wren from the bullrushes into the long grass. "He is in there" said Frost. Wren was caught up in the urgency of the situation but crept along with a loud narrative which would have warned any bird to lie low. 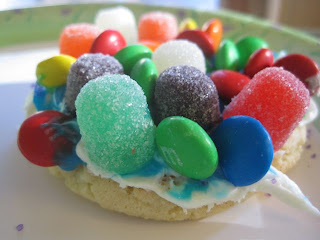 I was so busy roasting the lamb that I forgot to take pictures on Christmas day. This photo was taken the day after - of a gift the kids were given by their aunt. It was a "cookie decorating kit" with a box of snickerdoodle cookies, a tub of candy and a tub of frosting. I told the kids they could eat "the candy on their cookie, not from the tub." Foolish me. That simply created an incentive for Frost to load his cookie up with an unchewable load. Here is the picture of what kids do with sugar if they are not restrained.
Finally, the only Christmas Day picture worth sharing is giving me problems. Its a movie of the boys just after they opened the scooters they were given by Granny. These are the best gifts of the season. We have done many rides around the block and to the coffee shop. Since this wobbly start, Wren has learned to scoot and steer and can now move under his own steam all the way to the coffee shop at adult walking speed or above. He has had a few spills but is more afraid of his hair getting stuck in his helmet (as happened today) than accidents.
Posted by Shannon at 3:11 PM 4 comments:

We've been indoors too much over the holidays so today, despite blue skies which brought frozen ponds, I took the kids birding at Montlake Fill. The Fill is a famous and favorite site for local birders and has been described as "one of the best birding locations on the West Coast". For Christmas, Mum and I gave Frost a pair of binoculars thus ending, forever, the binocular wars of yore in which each child formed an enemy faction demanding control of the 'noculars and waving them about fruitlessly "I can't SEE ANYTHING" while the rare bird flew away.
Today, there was amity and joy as we saw the following birds.
I even saw a lifer - a marsh wren. It was a good bird (not as good as the crowned sparrows who rustled in the grass by my feet close enough for a passable shot with my point and shoot canon). Frost caught the bug and tried to track it in the grass, creeping along and making cheeping noises with his lips as we have seen Granny do.
I took the sighting of the marsh wren as a good omen. (Cardiology clinic on Jan 11th has me spooked and so I am reading omens in the clouds and blog posts).
"This means that Wren is going to be very healthy next year." I said.
"Or it means that Wren is going to fall in a marsh" said Frost, cutting to the quick of the difficulty with interpreting omens.
I think I am right although I was careful to guard Wren on the banks of Lake Washington after that even though he was excited to get a clam that he saw "innawater".
Other excitements were:
Here is our bird list:
Posted by Shannon at 11:59 AM No comments:

Its ironic that the thing many mothers want from their beloved families is for them to go away for just one hour. Its a very loving thought. We all know we would be more present, prepared and peaceful if we had a little time out and, try as you might, its hard to find someone (other than the stray grandparent) to take the kids OUT without you. We also know we would have a lot of fun in a house suddenly quiet enough to hear a fire crackle, to play classical music, to boil a kettle and make a cuppa while the water is still hot.
My beloveds have gone out to buy me a cake. Its blissful and I will love them more when they return.
Of course, its also ironic that I spend the time while they are out doing mundane tasks like cleaning the living room, rotating the laundry......
[ASIDE: While we are redesigning the bathroom environs, should we move the washer and dryer up from the basement? Its an option. How much is it worth to NOT carry loads of washing up and down the stairs? I am having trouble answering and I am not sure whether its my frugality, my concern for the various other uses of the large closet they could go in or just a self-deprecating sense that I am lazy to consider it. Do I need that exercise? [yes] Is it fun? [No] Is it likely to get worse as the kids get bigger and their clothes are smellier and heavier? [yes] Are they going to help more [slightly]. Would it be cool to have more storage upstairs for books/art/cleaning stuff/ games? [Yes] What would you do?]
and writing this blog.
Still, housework done alone to the crackle of the fire is strangely satisfying.
I have had a good birthday so far. We had a lovely walk to Vios for breakfast (Josh commented that if it were not my birthday we would be driving) and I slept in until 7am even though Wren was up from 5.30am. Josh looks okay but may fall asleep during Avatar 3-D this afternoon.
I am going to stop typing now. I can hear the keys clacking and that's a sign I could use the peace elsewhere.
Posted by Shannon at 4:58 AM 2 comments:

I always enjoy the day after Christmas. You don't have anything scheduled and you can subsist on leftovers. The kids play happily with the new toys and you can spend the whole day in your pajamas with very little chance anyone will come by and if they do they are likely to be people you feel like seeing in your pajamas anyway. Frost and Wren played well today and we took the scooters for a ride to the park (even though it required dressing.) I made Pho for dinner from leftover lamb roast and Frost went out for half the day with Alex.
Still, today is clouded with a bit of melancholy for me. Perhaps because I lived in Indonesia, grew up by the sea and respect it, I felt personally very moved and horrified by the 2004 tsunami. All my life I have had nightmares about big waves which approach from distant horizons while I am trapped against a sandbar, wall or eroded beach and cannot escape. As the news came out those 5 years ago I felt a real sense of the horror and watched for news of the areas affected.
Recently I've been using Youtube to rewatch those early videos taken by survivors and remembering the unimaginable force of the sea which simply rose up by 20 feet and came inland before sucking out again. I also saw a special featuring survivors. Many of them remain traumatized by their experiences and the loss of children, partners and others close to them.
Also, this morning I woke and checked Jack's blog. Jack is a boy who is almost a year older than Wren and also has Shone's Syndrome. You parents of heart kids will know the feeling of commonality with families whose children have a similar diagnosis. Jack and his family have been in Boston for 6 months during Jacks very difficult recovery from a bi-ventricular repair. He had been on the fontan route until his left ventricle and mitral valve were considered worth saving. Unfortunately, he had a series of complications which led to rounds of infection.
This morning I opened his blog to find he had died. It is very sad. My heart goes out to the family.
I know that life is mixed with joy and suffering and you can find both wherever you look carefully. Still, these many and this one are those I feel for at the moment.
Posted by Shannon at 3:02 PM 3 comments: