It takes my family at least a week of 'civilization' to recover from camping. They want to stay up until the stars come out (10pm anyone?), eat pickles for breakfast, walk barefoot and have playdates every day. Meanwhile, everything smells of woodsmoke, the younger child thinks its alright to sleep in your bed, the elder one likes to sleep in his clothes and there is a sense that bathing is optional (because surely the clean-wild-air has washed our skin with its vapors?).

Equally, it takes me at least a week to recover any sense of urgency about the mess, the (surely) rotting teeth, the need for good boundaries and adult intervention in matters of dispute. I want it all to flow as seamlessly as mobs of children running from tent, to table, to playground, to beach. Messy, carefree, brutish ...and outdoors.

We have been camping at Lake Chelan State Park for 3 nights. It was great.

Thus, you find me with a mountain of laundry downstairs, somewhere. I don't care exactly at what stage it is. There is some kind of sticky substance adhering my right forearm to the desk. I can imagine it is old hot chocolate, melted marshmallow or perhaps simply glue from the pasting of Frost's 9th birthday invitations. I have not wiped it up. There are bags of strange camping implements that are surely essential to something. I have not inquired. Finally, I have not been organized enough to take pictures, retrieve them and make a blog. I have had to call my mother and have a long telephone debrief about our trip to assure her we are alive. I have had to impart news verbally - you know spoken words, on a landline, to Australia!

So, in case I haven't called you yet. Here is where we went (courtesy of Google): 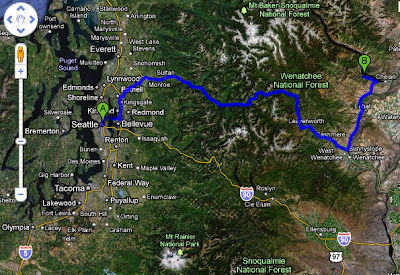 You can see from the blue line on the map that we drove from Seattle through the mountains (Stephens Pass) and down to Wenatchee. Even on the satellite image the color of the land tells its story - the mountains are a deep wet green but as you descend into Eastern Washington the earth becomes brown and then ochre and then the color of ash. The pale hills are broken with patches of brilliant green irrigation - the orchards and vineyards of the region. Where it isn't farmed there is scrubland with deep carved rivers and canyon-like valleys from the passage of old glaciers. The evergreens are dark like iron and in some parts it reminds me of South African inland landscape - hot dry hills under bright blue skies. 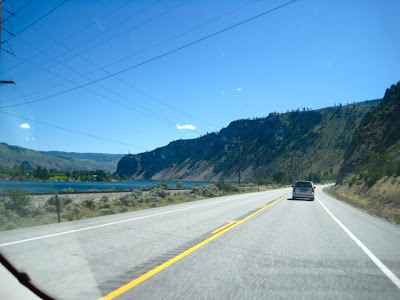 For the first night I was alone with the boys. The campsite was near a grassy clearing and they were both very helpful then played lego while I set up camp. Yes, we took the Lego minifigs with us. 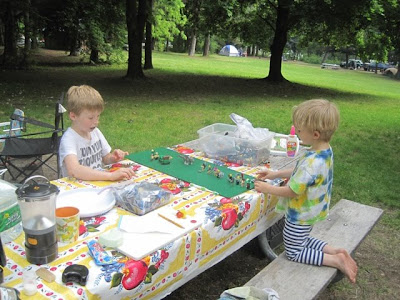 To show that we were on vacation, they ate candy after dinner and had hot chocolate. Frost was very impressed with the blueness of his tongue. You can see our tent in the background. It is a 4 person tent and barely fits all four of us with rolling around room. I fear that we will need to have two tents in a few years or go all-in for the huge tent like Trina. 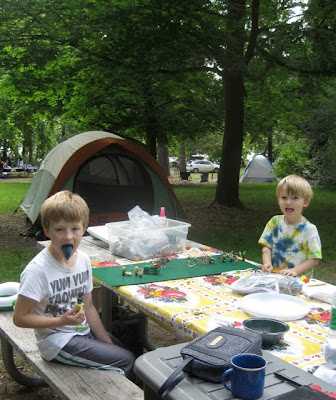 The next day, the nerf gun, Josh and our friends arrived: Tara, Alex, Phoebe, Fred and Pablo (the pug), Trina, Trey, Ezra, Isaac, Joe and Julianna and also my neighbors Lauren and Elias. It was a lovely group of friends, especially happy for the five boys who are of a similar age and for Wren who thinks he is 8, almost.
Of course, Wren had to possess the nerf gun which shot bullets about 15 feet with the correct action. He managed to get his hands on it when the boys went to play putt-putt with Fred. I think this picture is hilarious. If only I had an American flag and a dead deer next to him you'd think I had gone all survivalist. Interestingly, Wren did tell me that he wants to eat dead chickens again. I said we are not going to eat them because they live very badly but he said that our chickens do not live badly. I am not sure whether he wanted to go and eat our chickens or if it was just the next train of thought but he did insist on eating Trina's salami even knowing it was a dead pig. The child has conviction. 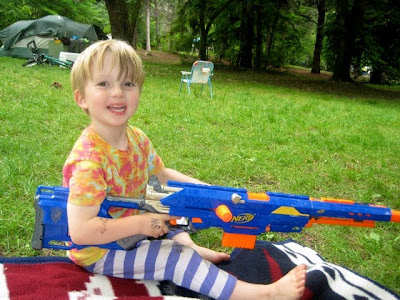 "Do I have to be a vegetarian if I kill me a deer?"

Wren loved the tent. Whenever he felt anxious due to rain, dogs, weariness - he went into the tent to snuggle. He slept very well - waking at about 7.30am each morning despite the 5.30am sunrise, Frost's proximate peeing, and the dawn cacophony of birds and squirrels. Note the dirt on Wren's face. Fred kept trying to wipe him down but only succeeded at Slide Waters the next day. 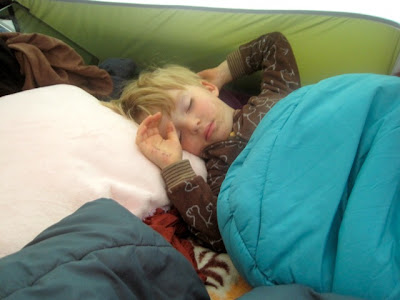 The lake was icy and it wasn't very hot (high 70s) for much of the time. Still, the bigger boys did a lot of swimming - the wetsuits helped. We bought an inflatable boat and raft which added to the excitement for them and helped them keep out of the water and still be on it which was only partially successful. At the end of one afternoon swim the boys lips were blue. 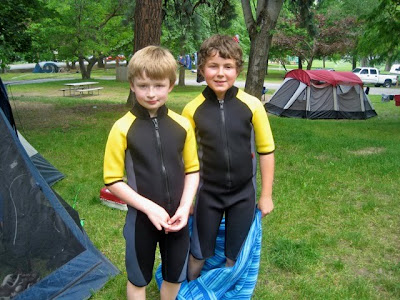 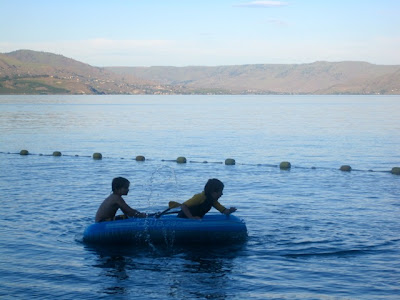 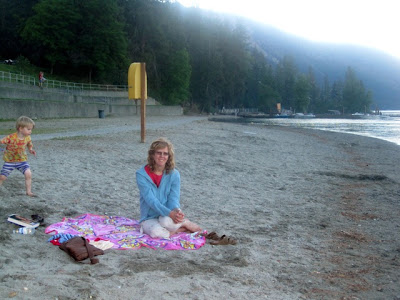 Tara at the swimming beach in the park. 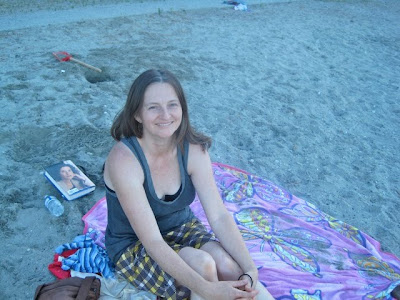 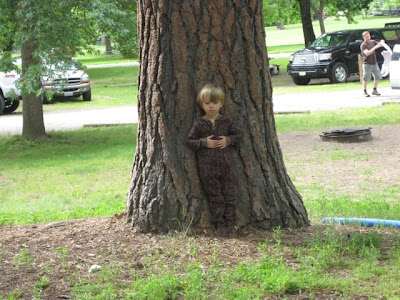 Wren, disguised so the gigantar zombie can't find him.
Wren is at a stage of talking ALL THE TIME. Its enough to make my head spin around and around to the sounds of a creepy orchestra. His major theme is to imagine an epic battle in which he defeats something huge and evil. In this picture (above) he was defeating Gigantar Zombies from Plants versus. This morning he imagined a quest involving the "Destiny Sword to kill the Goblin Boss." I believe he won. His weapon was a sword made out of tinkertoy, in fact he has been shooting dogs with it all day. He says it is "Imagination shooting not real."
Back to Chelan - one day we went to the nearby waterpark called Slide Waters. Here is a classic shot of Fred with the NY Times Magazine on the lawn. 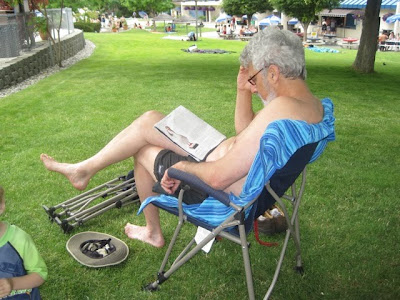 Applets and Cotlets
On the way home from Chelan (a 4 hour trip) we took a Factory Tour at the Applets and Cotlets factory in Cashmere. It was 91 degrees under brilliant blue so it was a relief to enter the air conditioned store and taste the samples. Tara and I were thrilled to discover that the founders were actually Turkish and still sell the original (classic) Turkish Delight. We both bought a few boxes as well as some curiosities like popping corn on the cob, sour applets and cotlets and long stretched taffy. 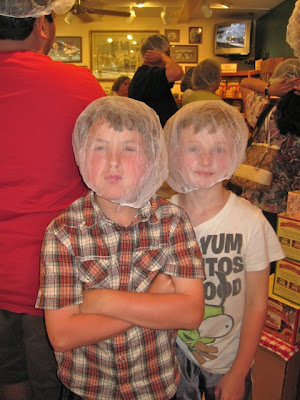 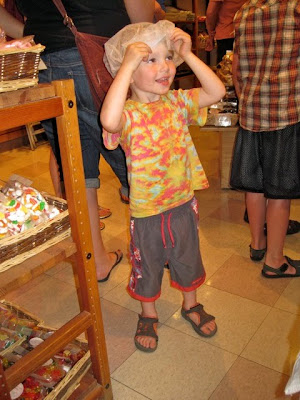 Wren peek-a-boos Tara with his hairnet
Overall, we had a wonderful vacation and hope to do it again next year. Lake Chelan State Park is not a backwoods place. Josh found it a bit tiresome (preferring mountain retreats with few people) not surprising since I have described the camp site as the Disney Version of car camping. Fred said "This is like camping in your back yard". For $6 per day you can even get wifi in your tent and I saw some people sitting on the back side of the store toilet block powering up their laptops from some exposed power points.
Be that as it may, its not bad to have a easy camping trip. Its in a new area (for us) and the kids had a great time. Wren and Frost both want to repeat the visit and I hope to do it again too.
Posted by Shannon at 12:31 PM

Looks totally great. We've bought all the camping gear (including a 6-person tent; we were told that a 4-person would feel small), but haven't yet put it to the test. Might start in the back garden...

Believe it or not, I've been to Wenatchee... G's dad grew up there, and his grandfather lived there until he died a few years ago (age 97). Almost as much of a metropolis as my dad's home town of Krugersdorp ;-)